Ghoomketu Review: Nawazuddin Siddiqui, saddled with an undercooked character whose motives seem arbitrary, has no meat to dig his teeth into. 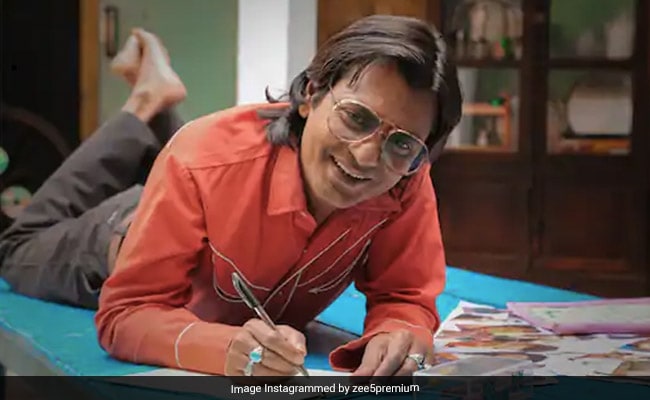 Ghoomketu Review: Nawazuddin Siddiqui in a still from the film. (Image courtesy: zee5premium )

Saibal Chatterjee The earnestness of the endeavour is passable. But an overwhelming blandness takes the sheen off writer-director Pushpendra Nath Misra's comedic take on small-town India's obsession with Bollywood. The broadsides it aims at Mumbai genre movies never find their mark. A few of the jibes are borderline funny but this story of a nondescript wordsmith who wants to script a new life in tinsel town is inordinately desultory.

The plot is overly reedy. A 30-something man from Mahona, Uttar Pradesh escapes the drudgery of his life and reaches Mumbai in the hope of becoming a screenwriter. But any possibility of his (mis)adventures yielding a rollercoaster ride is quickly frittered away. Ghoomketu is a vapid fits-and-starts affair that flits between a semi-rural family and the movie industry without striking any sort of rhythm. This is despite the unmistakable self-reflexive elements in the screenplay: Misra has his roots in Mahona, Lucknow district.

The titular hero (Nawazuddin Siddiqui) has no love lost for his irascible father (Raghubir Yadav). He composes slogans for autorickshaws and trucks, pens wedding cards and writes political rally songs while he waits for his big break. He does gather the courage to attempt a break from the past, but the future he desires keeps slipping away from his grasp.

Ghoomketu seeks employment in Gudgudee, a local newspaper. The editor (Brijendra Kala) has no vacancy for the job-seeker but gifts the protagonist a primer on the art of writing Bollywood potboilers. Does the book bring Ghoomketu a whiff of good luck? That is the question that the remainder of the film answers.

Streaming on Zee5 after being stuck in a limbo for years, Ghoomketu feels inevitably dated. The presence in the cast of the late Razzak Khan, who passed away in mid-2016, is one tell-tale sign. Apart from the fact that the departed actor's role remains stunted, the film's storytelling style, too, reeks of obsolescence.

The pen-pusher is at his tether's end when, at a mass wedding, he gets hitched to the wrong girl. He does not exactly cover himself in glory. He not only body shames the bride, he also refuses to see her face because she isn't the svelte young lass he expected her to be. That is where he loses us.

Within days of the marriage, Ghoomketu, egged on by aunt Santo (Ila Arun), flees to Mumbai with the family photo album. His uncle, Guddan (Swanand Kirkire), a greying youth leader, vows to get his nephew back to the family fold no matter what but the police have no photograph of Ghoomketu to go by.

In Mumbai, a corrupt and bumbling cop, Inspector Badlani (Anurag Kashyap), is assigned the job of finding Ghoomketu and putting him on the next train back to UP. But the feckless constable's incompetence keeps getting in the way. The latter is given a 30-day ultimatum by the police chief; Ghoomketu, too, has money only for a month's rent. It is a race against time for the two men.

Do not expect a riveting cat-and-mouse game here. The writer is supposed to be desperate to have a film script greenlighted but his pursuit never acquires life-and-death urgency. That apart, the comic potential of Inspector Badlani's ineptitude is barely tapped. Not for a moment does it appear that either Ghoomketu or Badlani has the urge to jump out of his skin and go for broke.

The perfunctory comedy comes up with nothing at all that could elicit deep belly laughs, let alone bring a smile to the lips. While the newspaper editor throws sporadic light on the Bollywood genre conventions that Ghoomketu must keep in mind while churning out a script, the aspiring writer on his part lurches from one storytelling form to another as a producer keeps shifting the goalposts.

When Ghoomketu writes a drama, he is asked to deliver a comedy. When he does finish a comedy script, the producer wants him to write a Star Trek-style sci-fi fantasy with Spock lookalikes. What's more, he also has a stab at the horror genre - a pretext for the film to serve up a detour into the heart of a movie presented by Bloodbath Films and titled Bloody Pool.

When it is time for the aspiring writer to try his hand at romance, Ranveer Singh (a pale, callow shadow of today's cocky star) and Sonakshi Sinha team up to deliver a variation on the DDLJ train station climax scene.

Amitabh Bachchan, too, steps in to provide a fillip to the film's flagging fortunes. He plays himself donning the garb of a prosecution lawyer in a film-within-the-film. Chitrangada Singh and Lauren Gottlieb pop up too for blink-and-miss appearances. But all this adds no lasting lustre to the all-round vacuity.

Ghoomketu goes round in circles in search of a centre. It does not have one. Lead actor Nawazuddin Siddiqui, saddled with an undercooked character whose motives seem arbitrary, has no meat to dig his teeth into. The other members of the cast, several of them proven quantities, do little more than float around limply.

Raghubir Yadav, as the hot-tempered patriarch of a rural family, raves and rants. The sense that his tirades make is inversely proportional to the decibel levels he scales. Ila Arun, in the role of the hero's aunt, and Swanand Kirkire brighten up things occasionally. But nothing that they do can offset the overall waywardness of the film.

And yes, Anurag Kashyap plays a policeman in a manner so half-hearted that you wonder why he accepted to be a part of the film, and on the wrong side of the camera at that.

The blotchy designs on the protagonist's colourful shirts sum up the nature of film. It seeks attentions but the flourishes of Ghoomketu fall flat. The film strives very hard to stand out, but its legs are not strong enough to hold the weight of its ambition. It collapses in a heap.

(Ghoomketu is streaming on Zee5 from May 22)