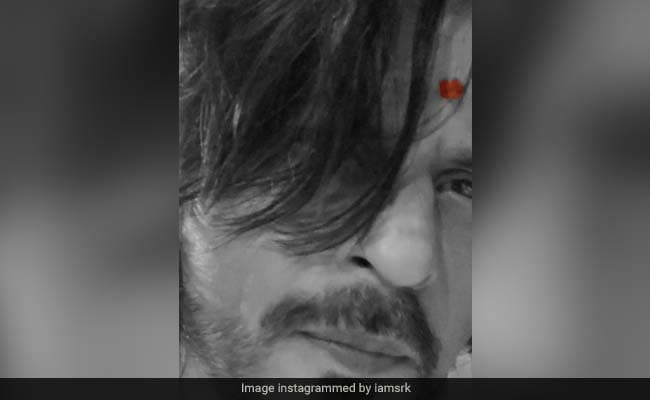 Actor Shah Rukh Khan, who celebrates Ganesh Utsav with his family every year, was trolled for his Ganesh Chaturthi post this year, again - the trolls had a problem with Shah Rukh celebrating a Hindu festival because he is Muslim. The comments thread of Shah Rukh's post had many unwarranted hateful messages questioning his faith while some commenters countered the trolls saying, "He celebrates all festivals, he is a true Indian." Shah Rukh, 54, shared a black-and-white picture of himself with a teeka on his forehead highlighted in red and he wrote, "Prayers and visarjan done... This Ganesh Chaturthi, may Lord Ganesha bestow upon you and your loved ones, blessings and happiness... Ganpati Bappa Morya."

Shah Rukh Khan is married to Gauri, who is a Hindu, and they've raised their three children Aryan, Suhana and AbRam with both faiths. Apart from Ganesh Chaturthi, Shah Rukh and his family celebrate Diwali, Eid and Holi with equal fervour and enthusiasm.

Prayers and visarjan done... This #GaneshChaturthi, may Lord Ganesha bestow upon you and your loved ones, blessings and happiness... Ganpati Bappa Morya!

After Zero tanked at the box office, Shah Rukh Khan had said in several interviews that he would take time to sign his next film. In the meantime, he produced two web-series for Netflix - Betaal and Bard Of Blood.