Game Of Thrones finale will air in 2019, more than a year after the last season concluded 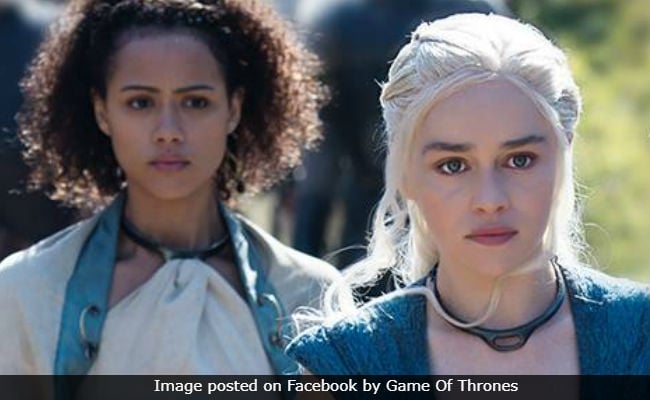 A still from Game Of Thrones. (Image courtesy: Facebook)

Nathalie Emmanuel, who plays the role of Missandei in popular television show Game Of Thrones, told news agency IANS why the final season of the series is taking longer to shoot and also added that it's worth waiting for as it will 'blow everyone's mind.' Nathalie told IANS that it took longer to shoot this season than any of the seasons because season eight will "bring closure" to all the stories in an exciting but heartbreaking way. "I think what we can expect from the final season of Game Of Thrones is just a real push. Like in the last couple of seasons, we have seen the pace of the show increase with the stakes getting higher and higher. There are so many storylines that have to come to conclusion. We have to play them out, so the pace of the show is continuing on that sense," IANS quoted Emmanuel as saying.

The final season of Game of Thrones will air in 2019 (no release date has been set for now), which is more than one year after Game Of Thrones 7 concluded (in August 2017). In the finale of the season 7, the Night King riding undead dragon Viserion breaks the Wall while Jon Snow and Daenerys Targaryen finally prove to Cersei Lannister and the others that the White Walkers are headed south towards King's Landing.

Cersei and Jamie Lannister (her twin brother and lover) will also reportedly part ways after he learns that Cersei will double cross Jon Snow and Daenerys.

"All of the things that you expect from Game of Thrones but at the same time since it is the last one, the emotions will be so much more intense. I am very excited for people to see it. We have been working so hard on it. The production is finished now," she told IANS.

Emmanuel is confident about the final chapter. "I feel like people will have their mind blown when they watch the final one."