Game Of Thrones 8, the final season of the show, is more about the fight for survival than for the Iron Throne 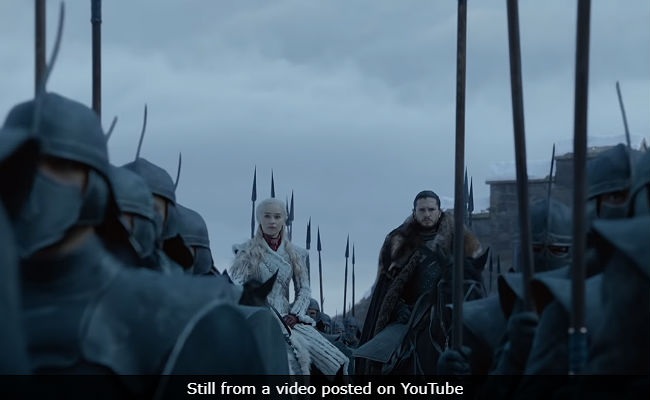 A still from the trailer of Game Of Thrones. (Image courtesy: YouTube)

The trailer of the final season of Game Of Thrones hit the Internet and no one can keep calm. This one will be the final fight, more for survival than for the Iron Throne, which Cersei Lannister (played by Lena Headey) currently occupies. The army of the White Walkers, led by the Night King atop the resurrected dragon Viserion has arrived, and everyone - Jon Snow (Kit Harington), Daenerys Targaryen (Emilia Clarke) and Jaime Lannister (Nikolaj Coster-Waldau) are willing to fight. At the end of the season seven, Cersei, despite getting the proof of the White Walkers' existence, decides to sabotage Jon Snow and Daenerys' plan to fight the Army Of The Dead. However, now it seems that Jaime appears to have parted ways with his twin and partner Cersei as he says in the trailer, "I promised to fight for the living and I intend to keep that promise."

This trailer doesn't give a hint about Jon Snow and Daenerys Targaryen, who get into a romantic relationship at the end of season 7, realising that they are actually blood relatives. In the finale of Game Of Thrones 7, through Bran Stark's vision, the audience learned that Jon Snow is the son of Ned Stark's sister Lyanna and Rhaegar Targaryen, the eldest brother of Daenerys.

Watch the trailer of Game Of Thrones 8: