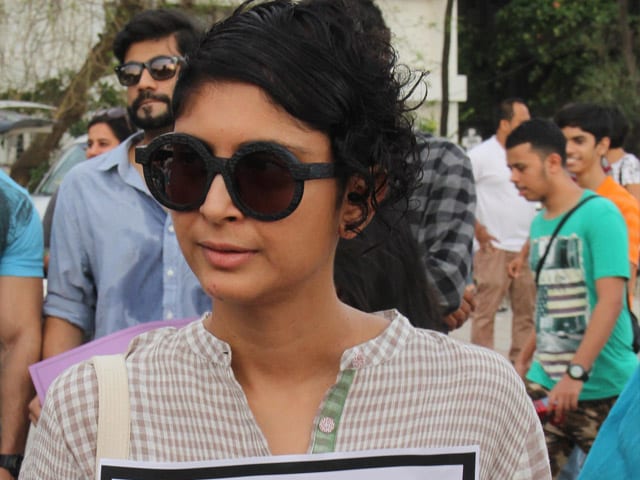 Kiran Rao at the protest march organized by FTII students in Mumbai.

Mumbai: With the protest over the appointment of Gajendra Chauhan as FTII chairman gathering steam, film personalities like Kiran Rao, Sayeed Mirza and Piyush Mishra have asked the government to initiate a dialogue with the agitating students and address their grievances.

Mr Chauhan, best known for playing Yudhisthira on TV show Mahabharata, took over as the chairman of the Pune-based institute last month. His appointment was heavily criticised by the current and former students of Film and Television Institute of India.
Rajat Kapoor at the protest march organized by FTII students.
FTII students have boycotted classes, abandoned academic work in protest against the appointment of Mr Chauhan, who they allege lacks "stature and vision" to head the premiere institution.

Filmmaker Kiran Rao, who has films like Dhobi Ghat to her credit, said the appointment of political figures in key positions in cultural institutions is a bad sign.

"I think you can measure the health of a country by the health of its cultural institutions and if you don't treat those with some respect and put leaders in their vision to lead these institutions, your country is in big trouble. So, I think it is very important that government pay heed to these protests," she said.

Sharing her concern, FTII graduate Sayeed Mirza said the post of the head of an institution is very crucial. "You judge a nation, its sanity, its civility through the country's institutions. To me, it is critically important as to who holds these institutions," he said.
FTII students during a protest march against the appointment of Gajendra Chauhan as the institute chief.
Gangs of Wasseypur actor Piyush Mishra said the new chairman does not fulfill the requirement of holding the top office at FTII.

"I want to know what kind of work he has done. I am not saying that he has not done any work but we are not familiar with it. Even if he has done any work he hasn't done this kind of work which merits to become the director of FTII. He should think over it generously and patiently," said the actor-musician.
Piyush Mishra and Kiran Rao pose with placard during the rally.
Veteran filmmaker Shyam Benegal, a former teacher and two-time chairman of FTII, however, said the solution to this problem can only be found through dialogue between Mr Chauhan and the protesting students.

"According to me, in a situation like this the entire student body should have a meeting with them. If you have a proper dialogue and you get to know the person. It is not important what political colouring you have, you can believe in whatever politics you want as long as you don't impose it on others," he said.

Oscar-winning sound arranger Resul Pookutty, a former student of FTII, had also expressed disappointment over the controversy. He said, "A person who becomes a chairman of an institute or a governing council should be able to inspire the students".

"They should look at him/her as aspiration to what they want to become in their life. I don't think the present council and its members and its chairman, who is appointed by the government of India, is anything to be aspired for. I think that it is cheating. A government cannot cheat its people," he added.