"From Reel To Real World": Neetu Kapoor Shares A Priceless Pic With Her "Loves" Ranbir And Riddhima

Neetu Kapoor and her children are all smiles in the image 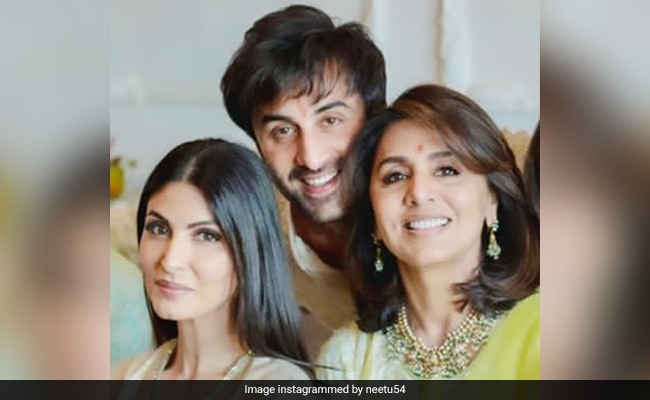 Neetu Kapoor is basking in all the praise coming her way for her role in JugJugg Jeeyo. The actress is receiving stellar reviews for her performance as the matriarch in the family-drama. After a series of images with the cast and crew of the film, Neetu Kapoor has now shared an image with her "real" family. In it, the actress is seen with her son Ranbir Kapoor and daughter Riddhima Kapoor Sahni. In the caption, she said, “From Reel to Real world. My loves,” with heart emojis and tagging her daughter. Replying to the post, Riddhima said, “We love u most,” with a heart emoji.

On Friday, Neetu Kapoor shared a still from the film in which she is seen with her co-star Anil Kapoor and said, “#JugJuggJeeyo at its heart, is about a family coming together to celebrate the good times and brave the bad ones…”

Speaking about her co-star Anil Kapoor, she added, “Working with Anil Kapoor for the first time feels exactly like that...like coming together with family to make some new memories and relive some old ones. We hope you will bless this union of families and shower us with your love and support.”

Both Anil Kapoor and Riddhima Kapoor replied to the post with heart emojis.

Amid her busy schedule, on the occasion of Father's Day, Neetu Kapoor shared a photo of her late husband, actor Rishi Kapoor and said, “Happy Father's Day…always always in our hearts,” with a heart emoji.

That's not all. Neetu Kapoor also began the promotions of her film JugJugg Jeeyo by dropping an image from her wedding to Rishi Kapoor. Along with the throwback image, Neetu said, “Mere liye shaadi ke baad sab badal gaya. I am starting this new journey…with your blessings Rishi ji. With you in my heart, always,” with a heart emoji.

Neetu Kapoor made her debut as a child actor and soon became one of the most popular Bollywood actresses with hits such as Deewaar, Khel Khel Mein, Kabhi Kabhie, Amar Akbar Anthony and Dharam Veer to her credit.