Manushi Chhillar will feature alongside Akshay Kumar in Prithviraj 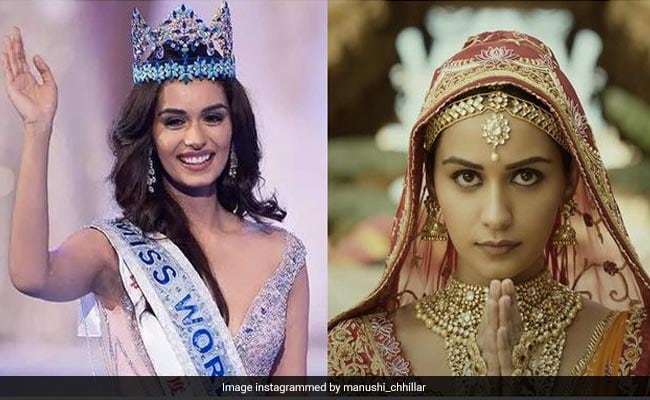 When Manushi Chhillar won the title of Miss World 2017, little did she know how her life was going to change. Ever since her feat, Manushi has been in for surprises. And now, she has made a journey from a beauty pageant winner to an actress. Currently, Manushi is all set to make her Bollywood debut in the historic drama Prithviraj. What's more interesting is that she will share the screen with one of Bollywood's superstars, Akshay Kumar, who plays the titular character in the movie. Acknowledging her wonderful journey, Manushi shared a post with two photos: the Miss World 2017 winning moment and her first look from Prithviraj. Along with this, Manushi has also revealed why the month of November will hold a special place in her heart. Can you guess? Oh c'mon, it is an easy one. She won the title in November 2017 and the trailer of her first film was released on November 15.  Here is her caption, "November will be special forever. Feeling emotional, elated, thrilled, nervous, curious - all at the same time. Can't wait for what lies ahead."

Manushi Chhillar couldn't help but reminisce about the day when she won Miss World 2017. The model and actress shared a video of the ceremony from November 19, 2017. There we revisit the exciting moment when Manushi was declared the winner of the pageant. She wrote in the caption, "Where it all began, on this day. Eternally grateful."

Only three days ago, Manushi Chhillar dropped the poster of Prithviraj on her Instagram timeline. Manushi plays the role of Prithviraj Raso's wife, Sanyogita. The film will also feature Sonu Sood, Sanjay Dutt, Sakshi Tanwar and Manoj Joshi among others. It is scheduled to be released on January 21.

Earlier, Manushi Chhillar gave us a sneak peek during the film's making. She shared a silhouette of her character from the movie. All she wrote was "Sanyogita" and hashtagged Prithviraj.

The crew of the film sat for a puja before starting off the project. Manushi Chhillar had shared this moment with her Twitter followers. Manushi uploaded a photo where she is seen sitting beside Akshay Kumar and director Chandraprakash Dwivedi.

In an earlier statement, Manushi Chhillar had talked about her role and said, "It is a huge responsibility to play princess Sanyogita." Manushi added, "She [Sanyogita] was a powerful personality and she stood up for what is right and took the most important decisions of her life by herself."