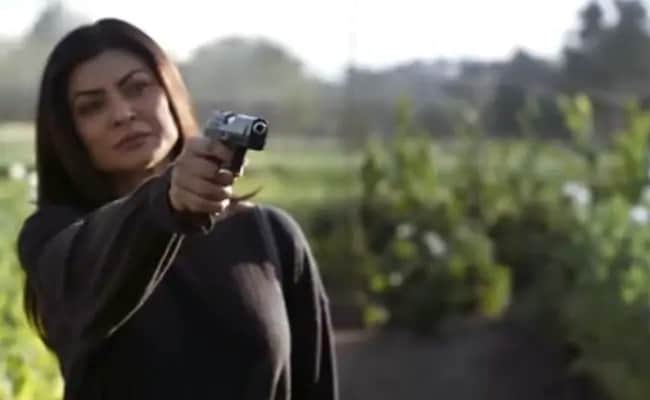 Sushmita Sen will be seen in season 2 of Aarya

Sushmita Sen is excited about her upcoming season of Aarya. The actress has had a hectic schedule in the past few months, owing to health issues that she hasn't disclosed yet. While the news of her surgery shook the Internet, Sushmita Sen came back for a live session just before setting out on promoting Aarya 2. And guess what? Her video is worth a watch. Sushmita Sen, who's always brimming with love for fans, let her heart out in an Instagram live session once again. She started the video, saying, "So you guys wanted me to come live and I am hazir hoon. It's been a lot of travelling for me. I am thrilled to be finally back just in time for this beautiful season 2 of Aarya."

Sushmita Sen also gave a huge shout out to the crew and cast of Aarya 2. But before that, the actress thanked fans. She said, "I just have to tell you guys, the warmth, the anticipation, the love, the concern, all of it that I have been receiving with great love and excitement."

Talking about her recent surgery, Sushmita Sen said, "This birthday of mine, I have been focussed on my health and getting myself better and getting ready for the next 15-20 years of my life at least." Understanding the concern among her fans, the diva added, "There will be a time when I will tell you more about it. But today it is about getting ready for the work that we put in with covid, with shooting in a bubble, with some of the fantastic people who came together as the team of Aarya to make season 2 possible against all odds."

"I am your Sush and I am your Aarya and that stays constant," she added. And, we definitely felt the warmth of her words. The actress used the live session as a place to bond with her Instafam. With a touch of humour, Sushmita Sen said, "I have my fingers crossed that all of that effort and mehnat and love that we have put into Aarya season 2 reaches you in your living rooms, binge-watching it and snacking on something super fun and unhealthy." We loved to hear the giggle at the end of her sentence.

Sushmita Sen also had a surprise for us. She said, "Honestly this time, other than what I saw in the dub, I'm going to be watching the season with you. I'm very excited." While giving a shoutout to Ram Madhvani, the directors, the star cast and crew of the film, Sushmita Sen said, "Actually, I don't want to spoil the season. I want you to see what they have done."

Sushmita Sen also disclosed what she thought about the poster of Aarya 2. The actress went on to say, "I thought to myself that I have always felt a deep connect with Aarya as a character but always seen Sush in her. But that poster is Aarya, just completely Aarya."

Sushmita Sen wasn't alone during the live session. Her daughters, Renee and Alisah, sat behind her and often burst into laughs. Towards the end, the actress asked them why they look so pretty just out of the shower. To this, her daughter said, "Because mom says that we are God's handwriting." Sushmita Sen at once agreed, "Oh that's true."

Sushmita Sen recently underwent surgery and she talked about it in another video.

So are you excited for Aarya 2?