For Thugs Of Hindostan, Amitabh Bachchan And Aamir Khan Impress Fans In Tamil

Aamir Khan shared an announcement video (also featuring Amitabh Bachchan) for Thugs Of Hindostan, which was recorded in Tamil and Telugu 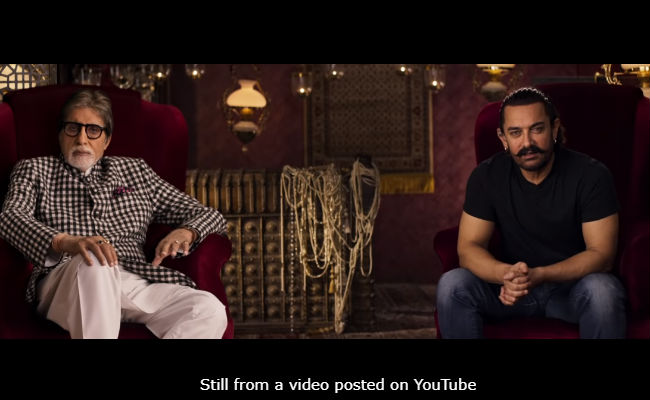 Thugs Of Hindostan stars Amitabh Bachchan and Aamir Khan treated their fans with a special announcement about their upcoming film by speaking to them in Tamil and Telugu (the film will be dubbed in these languages). Aamir and Mr Bachchan announced that the film will open in theatres on Diwali and said: "This Diwali thugs are coming... See you all in cinemas." Aamir, who was speaking in Tamil for the first time, was nervous while sharing the video with his Instafam and wrote: "My first attempt at Tamil. Hope you like it." But he had nothing to worry about as fans loved him. "What incredible diction... spoke almost like a Tamilian... is there anything you guys can't do? #respect. Eagerly awaiting this," wrote a fan on Aamir's post.

Watch the announcement of Thugs Of Hindostan in Tamil:

My first attempt at Tamil. Hope you like it. Love. a #ThugsOfHindostan | @yrf | @tohthefilm | @amitabhbachchan | @katrinakaif | @fatimasanashaikh

Here's the same announcement in Telugu:

Amitabh Bachchan (Khuda Baksh) was introduced as a thug, who rules the sea while Fatima (Zafira) plays an excellent archer with a mission. Katrina Kaif (Suraiyya) stars as a mesmerising dancer while Aamir (Firangi) plays a crook-like thug against whom we've been warned by Katrina and Fatima.

Here's the first poster of Thugs of Hindostan, which was released after the individual motion posters of the principal characters.

Thugs of Hindostan, produced by Yash Raj Films, is releasing on October 8.