For Ileana D'Cruz, "Avoiding People" Be Like This Pic 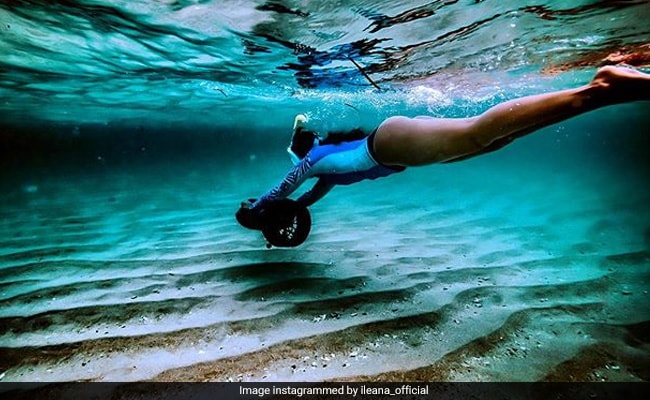 Ileana D'Cruz's latest post on Instagram will crack you up. The actress, on Tuesday, made a trip down memory lane and fished out a throwback photo of herself from what appears to be her underwater photoshoot and it is breathtaking. However, along with the picture, Ileana's witty caption also grabbed the attention of her fans on Instagram. The actress added a dash of humour to her post and used the old photograph to show her fans how she is "avoiding people" nowadays. Her caption read: "Me avoiding people." In the picture, Ileana can be seen swimming underwater wearing a blue swimsuit. In her post, Ileana also tagged underwater photographer Bhushan Bagadia and wrote: "Can't remember if you took this photo." Check out the actress' post here:

Me avoiding people. - - - - - [Can't remember if you took this photo @bhushanbagadiapositives ]

Ileana D'Cruz has been setting the Internet ablaze during the lockdown by sharing stunning pictures of herself from her vacations and underwater photoshoots. Last week, she expressed how much she is missing swimming with the help of a throwback picture. "How I miss this feeling," she wrote alongside the photo.

"I miss the beach," read the caption on her another post, which featured her sun-bathing in a white bikini.

Ileana D'Cruz is best-known for her performances in films such as Barfi!, Phata Poster Nikla Hero, Rustom and Happy Ending among others. She was last seen in the 2019 comedy film Pagalpanti, in which she co-starred with Anil Kapoor, John Abraham, Urvashi Rautela, Arshad Warsi, Pulkit Samrat and Kriti Kharbanda. The actress will next be seen in The Big Bull, in which she will share screen space with Abhishek Bachchan. The film will be directed by filmmaker Kookie Gulati and it will be produced by Ajay Devgn.