Aditi Rao Hydari shared the first look from the film and wrote: "To new beginnings." 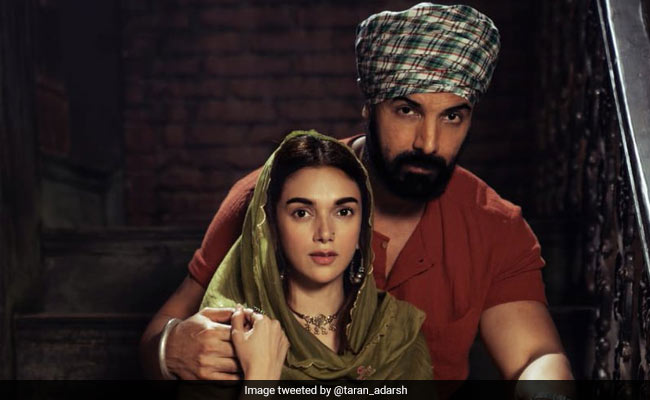 John Abraham and Aditi Rao Hydari booked a spot on Wednesday's list of trends. The reason? Both the actors will be seen sharing screen space for the first time in Kaashvie Nair's untitled film and their looks from the movie were unveiled on social media. Bollywood trade analyst shared an update on Twitter and revealed that the duo will feature in "special roles" in the film, which stars Arjun Kapoor and Rakul Preet Singh in the lead roles. In the picture, John can be seen wearing a turban, while Aditi Rao Hydari can be seen dressed in a pastel kurta and sharara, with an olive green dupatta wrapped around her head. Aditi Rao Hydari shared the picture on Instagram and wrote: "To new beginnings..."

The film is set in 1947, around the time of India's Independence, where John Abraham and Aditi Rao Hydari will be seen playing Arjun Kapoor's grandparents in the film. John Abraham, who is also producing the film, said in a statement, "The team has taken extreme care, following all the SOPs, issued by the ministries and the concerned authorities. As a producer, it's important for me to look out for our cast and crew." Speaking of his character in the film, John said, "When I heard the script, I instantly knew that this would be a special part, and when Kaashvie suggested I play it, it was difficult to refuse."

"John and I play a couple in 1946-47, whose love story remains unfinished and unrequited till Arjun's character feels the need to bring it to closure. Films like these are rarely made today, so I was quick to come on board," said an excited Aditi Rao Hydari.

Check out the look here:

FIRST LOOK... #JohnAbraham and #AditiRaoHydari in a cross border love story that spans generations... The duo enact special roles in the film [not titled yet]... Stars #ArjunKapoor and #RakulPreetSingh... Directed by Kaashvie Nair. pic.twitter.com/OAKhUNGYU6

The untitled film was announced in November, last year. In March, the film's lead actor Arjun Kapoor shared a BTS picture with his co-star Rakul Preet Singh and he wrote: "Sitting at home missing work and being on set but safety first always. One has to pause sometimes, stop and soak it all in, take a moment and breathe after sprinting so much before we can even begin thinking of walking again."

Sitting at home missing work & being on set but safety first always. One has to pause sometimes, stop & soak it all in, take a moment & breathe after sprinting so much before we can even begin thinking of walking again... #mondaymusings #thinkingoutloud #selfieking #setlife #westilldonthaveatitle #quarantineandchill

John Abraham was last seen in the comedy film Pagalpanti. His upcoming projects include Satyameva Jayate 2, Mumbai Saga and Attack.

Aditi Rao Hydari will next be seen in the film V, which will release on Amazon Prime Video. She will also feature in The Girl On The Train, Hey Sinamika and Tughlaq Durbar.