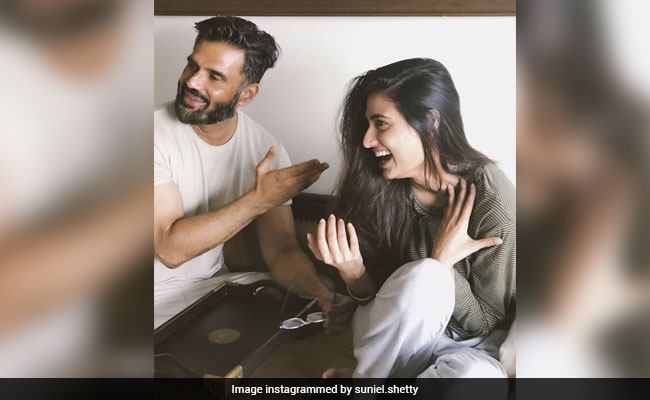 The makers of Athiya Shetty's work-in-progress film Motichoor Chaknachoor have reportedly issued a public notice, in which they've stated that the actress' father Suniel Shetty has "no authority" to take decisions for the project and should he interfere it "shall be considered as... breach of confidentiality at its own risk, cost and consequences." A per a report published in Mumbai Mirror, the film's co-producers Rajesh and Kiran Bhatia are the "only final authority and the decision-making authority" on every aspect of the project. When Suniel Shetty was asked about the aforementioned public notice, the actor told Mumbai Mirror: "I will talk at the right time."

As per the Mumbai Mirror report, the public notice read: "Mr Suniel Shetty has no right, title and/or interest in the said film and has no capacity or any authority to either directly or indirectly discuss or take any decisions, negotiate, strategise or overlook the edit or in any manner interfere or be involved with the film Motichoor Chaknachoor or with its cast, crews, technical teams or coordinate with the studio involved with the film or its creative and marketing teams or post productions or any person connected or with the trade".

"If done so, it shall be considered as trespassing and breach of confidentiality at its own risk, cost and consequences," the notice read.

Athiya Shetty debuted opposite Sooraj Pancholi in Salman Khan-produced Hero (2015) and she followed it up with Mubarakan. Motichoor Chaknachoor is directed by Deba Mitra Hasan and it also features actor Nawazuddin Siddiqui.