"You will always walk with me," wrote Raveena Tandon 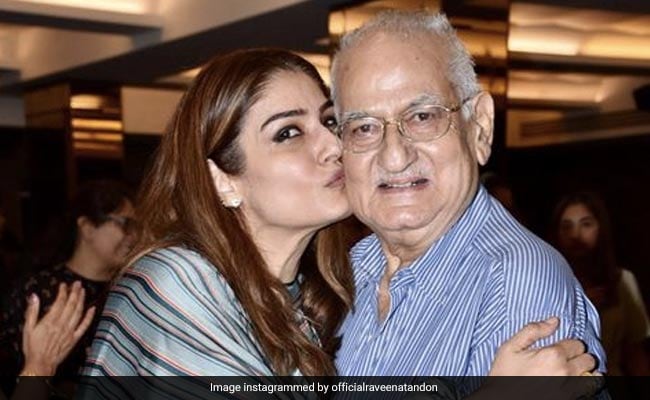 A throwback of Raveena with her dad. (courtesy officialraveenatandon)

Filmmaker and Raveena Tandon's father Ravi Tandon died at the age of 86 on Friday. Ravi Tandon was best-known for directing films like Khel Khel Mein, Anhonee, Nazrana, Majboor, Khud-daar and Zindagi, to name a few. Raveena Tandon announced the news of death of her father on social media. She shared a few memories in the form of throwback pictures with her dad and she wrote in her tribute: "You will always walk with me , I will always be you, I'm never letting go. Love you papa." Raveena's friends from the industry paid condolences. Neelam Kothari wrote: "Heartfelt condolences." Juhi Chawal added, "Heartfelt condolences to you and your family Raveena... May his soul rest in peace Om Shanti."

This is what Raveena Tandon posted her for father:

In terms of work, the actress will next be seen in the Kannada film KGF: Chapter 2, which is slated to release in Kannada, Tamil, Telugu, Malayalam and Hindi. The film will feature Yash and Sanjay Dutt. In terms of films, Raveena Tandon was last seen in Shab, which released in 2017. In the same year, she starred in Maatr. The actress also featured as one of the judges in the ninth season of the dance reality show Nach Baliye 9, along with choreographer-director Ahmed Khan. She was last seen in Netflix'sAranyak.