"The only people in the world, I've ever asked for a picture with," wrote Raveena Tandon 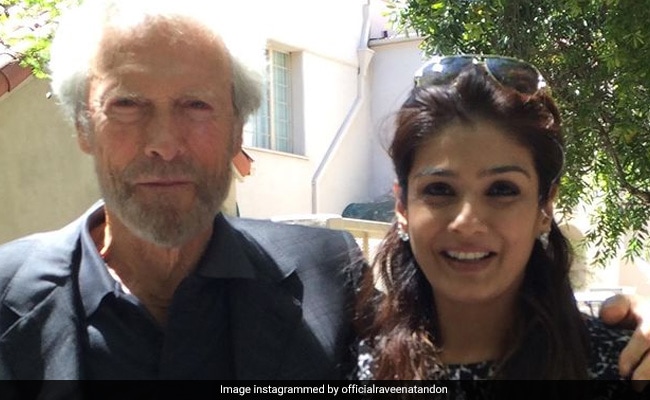 Do you know what do Clint Eastwood, Al Pacino, Amitabh Bachchan, Jackie Chan and Dalai Lama have in common? It's quite simple actually - fan girl Raveena Tandon. The actress, on Thursday, shared a set of pictures of herself with the aforementioned popular personalities from all over the world and wrote: "My fan girl moments the only people in the world, I've ever asked for a picture with. Al Pacino, Clint Eastwood, Dalai Lama, Jackie Chan, Shri Amitabh Bachchan ji (with Amit ji, every time I meet him)" and added heart-eye emojis. The first photo features Raveena Tandon happily posing with Al Pacino while the second, third and fourth feature Clint Eastwood, Dalai Lama and Jackie Chan, respectively. The last photo of the album shows Big B.

The actress will next be seen in Yash's KGF: Chapter 2, which also stars Sanjay Dutt. It is directed by Prashanth Neel.

On personal front, Raveena Tandon adopted two daughters named Pooja and Chaaya in the 1990s when she was a single mother. She married Anil Thadani in 2004 and the duo welcomed their daughter Rasha in 2005 and son Ranbir Vardhan in 2008.