Father's Day 2021: Akshay Kumar's Post For His Dad And Kids Aarav, Nitara Is Everything

"If I've been able to pass on even a few drops to my kids, my work here is well done," wrote Akshay Kumar 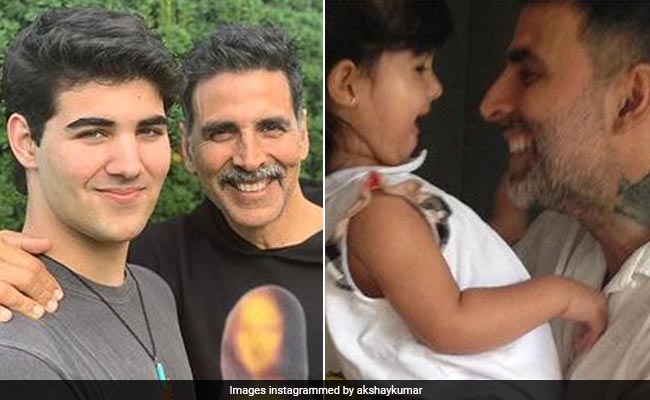 Akshay Kumar decided to celebrate Father's Day today by sharing a super cute post on Instagram. The actor shared pictures with his dad, and kids Aarav and Nitara. In his note, the actor thanked his father and added that he wishes to learn a lot from him and teach the same to his kids. "My father gave me an ocean of love and wisdom. If I've been able to pass on even a few drops to my kids, my work here is well done," wrote the actor. He added, "Happy Father's Day to all." Akshay Kumar's post was filled with heart emojis from his fans.

Meanwhile Twinkle Khanna shared a picture of Akshay Kumar and daughter Nitara and chose these set of words to describe it: "He is her wall. She learns to stand holding onto him. Shielded, she removes bricks at eye-level and peeks at the world. He waits for the day when she will clamber over the top and becomes a wall for her own. Happy Father's Day."

Akshay Kumar will next be seen in Atrangi Re with Sara Ali Khan and Dhanush. His impressive line-up of films also includesBell Bottom, Bachchan Pandey, Prithviraj, Sooryavanshi, Raksha Bandhan and Ram Setu. He was last seen in the horror comedy Laxmii.

Alia Bhatt Decodes Her OOTD: "Husband's Away, Stole His Blazer"