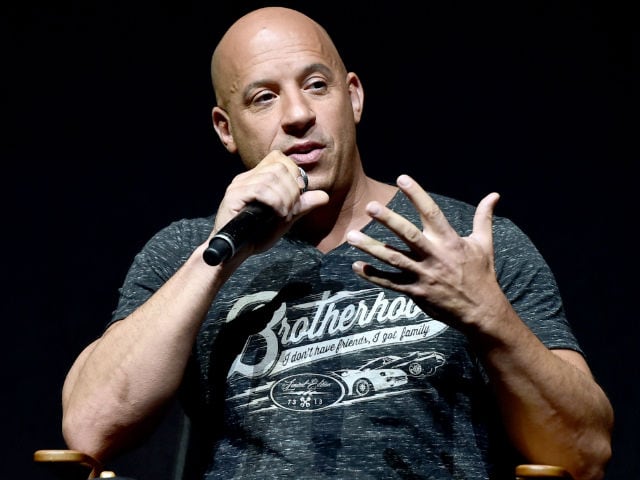 Las Vegas: Vin Diesel choked back tears on Wednesday as he paid an emotional tribute to his late The Fast and the Furious co-star Paul Walker at the CinemaCon convention. The 49-year-old actor revealed it was Paul Walker who insisted there should be an eighth instalment in the $3.9 billion franchise, as he introduced The Fate of the Furious at the gathering in Las Vegas. "Part of Paul's legacy lives through every frame that we shoot... You are reminded of this angel that was so integral to this concept of brotherhood for our millennium," Vin Diesel said, fighting his emotions. "There's something beautiful about that. There's something celebratory about that... I always feel like he's looking down on us, so we didn't want to let him down."

Paul Walker was 40 when he died in a fiery single-vehicle crash in California in 2013, before the seventh film was released.

Tyrese Gibson, who has been in the high-octane franchise since 2 Fast, 2 Furious (2003), echoed Diesel's tribute. "The last time I was on this stage we were here with Paul Walker. We move and operate in the memory of Paul Walker," he told the crowd at the Caesar's Palace hotel.

In The Fate of the Furious, due to hit theaters on April 14, a mysterious woman (played by Charlize Theron) seduces Vin Diesel's Dominic Toretto into the criminal underworld.

Vin Diesel, now a producer as well as star, confirmed a previous announcement that the series would extend to at least a tenth movie. "As the world sees this movie, they'll see how it's the beginning of a new trilogy," he said.

Promoted
Listen to the latest songs, only on JioSaavn.com
Vil Diesel and Tyrese Gibson were joined onstage by Ludacris and newcomers Kurt Russell and Charlize Theron, before Universal delighted the CinemaCon audience by premiering the movie.

Oscars: Academy To Continue With PwC With Revised Protocols