Responding to Shibani Dandekar's post, Farhan Akhtar wrote: "Could not have done it without you." 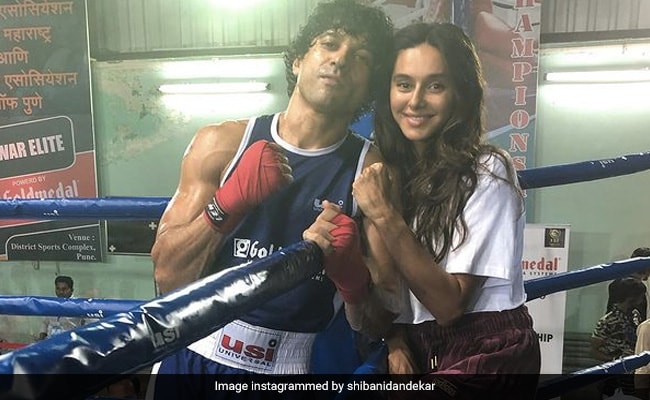 Farhan Akhtar's Toofaan premiere on Amazon Prime was followed by a shout out from his girlfriend, actress-model Shibani Dandekar. "Watching your journey so closely has been nothing short of a privilege. You went to unimaginable lengths to get into the skin of the character, you didn't give up till you found his authentic voice, you took your mind to the darkest of places, and you tested your body every single day," read an excerpt from Shibani's post, which she dedicated to the 47-year-old actor. In Toofaan, Farhan Akhtar plays the role of a street fighter from the city of Dongri, Aziz Ali, who becomes a celebrated boxer. "Toofaan" is the name he earns for his performance in the boxing ring.

Referring to Farhan's intense training sessions for the role of a boxer, Shibani added: "There was blood, sweat, punches, literal blows but you hit back with persistence, endurance, grit, resilience. Slowly the lines blurred and you literally morphed into AJJU BHAI aka AZIZ ALI BOXER! Today, on your big day, I want you know that I am sending you all my love. And I can't wait for the world to witness the magic of Toofan. Proud of you Farhan!"

Meanwhile, in the comments section, an emotional Farhan Akhtar wrote: "Could not have done it without you."

Toofaan Is directed by Rakeysh Omprakash Mehra, with whom Farhan Akhtar previously worked in Bhaag Milkha Bhaag. The film is co-produced by Riteish Sidhwani, Om Prakash Mehra and Farhan Akhtar. In his review for NDTV, film critic Saibal Chatterjee wrote: "Farhan Akhtar, to whom the film's story idea is credited, delivers a credible performance."