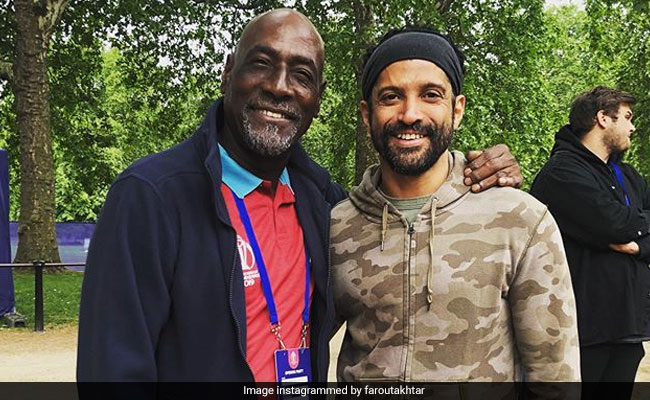 Farhan Akhtar, who is currently in London with his girlfriend Shibani Dandekar, shared a special "fanboy" moment with us on social media. The Rock On!! actor met West Indies cricketing legend Vivian Richards during the inaugural ceremony of Indian Cricket Heroes (ICH) at the Lord's Cricket Ground and added a memory of his meeting with the legend to his photo archives. For those who don't know, Farhan Akhtar and Shibani Dandekar hosted the first edition of ICH event at Lord's. Sharing a photo with Sir Vivian Richards, Farhan wrote: "Full fanboy moment." Vivian Richards, who is a cricket legend known for his destructive batting style, is also the father of famous fashion designer Masaba Gupta. But first thing first, take a look at Farhan's recent post here:

The inaugural India Cricket Heroes event was hosted by Farhan and Shibani and it seems they had a good time being a part of it. Tweeting about the event, Farhan Akhtar wrote: "Was super fun hosting the first edition of ICH, watch the broadcast on Star Sports India tonight at 8 pm as we honor the heroes of Indian cricket."

Was super fun hosting the first edition of @ICHOfficial, watch the broadcast on @starsportsindia tonight at 8 pm as we honor the heroes of Indian cricket #IndianCricketHeroeshttps://t.co/eljN7WaFHO

Farhan Akhtar and Shibani Dandekar have been posting several love-filled photos from their London trip. Even though they are undergoing training under former kickboxing champion Drew Neal in the city, they manage to scoop some time off their busy schedules to have fun together. Take a look at the aforementioned pictures here:

Masaba Gupta was born to Neena Gupta and Vivian Richards, when they were in a relationship in the Eighties. Neena is now married to chartered accountant Vivek Mehra while Vivian Richards is married to Miriam. Last year, on Vivian Richards' birthday, Masaba posted a lovely family photo and said that she "dropped every single 'important' thing" she was doing to surprise her dad on the occasion. Take a look at her post:

The World Cup will start on May 30 and India will play their first match against South Africa on June 5.