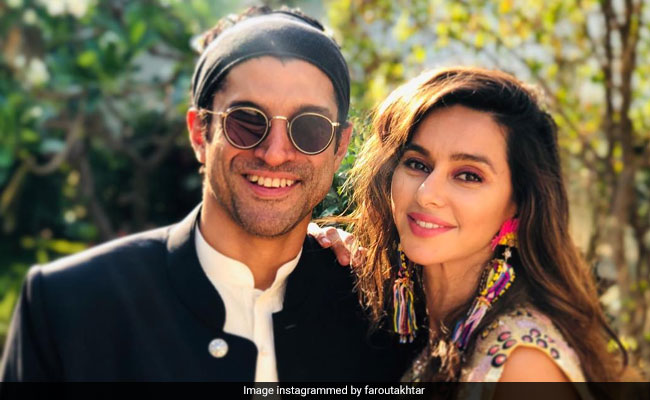 Farhan Akhtar was Shibani Dandekar's plus one at her friend's wedding festivities over the week and once all the craziness wrapped, the actor-singer took out time to Instagram an adorable photo of himself and Shibani on Instagram. Farhan Akhtar's caption "Sunshine and smiles" perfectly sums up the photo - the couple smile ear-to-ear as the pose with each other. Within minutes of the click being uploaded, Hrithik Roshan and Dia Mirza sent their thumbs ups for the "beautiful" love birds while Farhan's Instafam couldn't stop posting the love-struck emojis. In the photo, Farhan sports a blend of a rockstar and desi look - he paired a headband with his sherwani while Shibani was pretty in pink.

In a separate post on her Instagram, Shibani shared the details of her stunning lehenga in a post in which she can be seen twinning with her BFF Monica Dogra. Both Shibani and Monica "are the happiest" in Payal Singhal lehengas.

Here's how Shibani Dandekar and Monica Dogra kick started the festivities at their friend's wedding - with some "mid-week balling."

Pretty epic wedding weekend @rachnac27 - now I'm in recovery. . . Thank you to @payalsinghal for the clothes! And to @shibanidandekar @faroutakhtar @kizeesmack for sorting everything out for me so I could be a jetlagged zombie . . Congratulations my sweet @rachnac27 you were the most gorgeous bride

Meanwhile, the real-life pairing of Farhan Akhtar and Shibani Dandekar have got fans intrigued with speculated details about a possible wedding cropping up every now and then. In an episode of In an episode of the show TapeCast, Farhan addressed the rumours and left us even more confused: "It may be April or April be 'May'."

Farhan and Shibani have introduced each other to their families already - Shibani celebrated Holi with Javed Akhtar, Shabana Azmi and Zoya earlier this year while Farhan was Shibani's plus one at her sister Apeksha's wedding.

(This story has not been edited by NDTV staff and is auto-generated from a syndicated feed.)
Comments
farhan akhtarshibani dandekar