Fantastic Beasts: The Crimes Of Grindelwald Final Trailer - You Did Not See That Big Nagini Reveal Coming

Nagini, played by actress Claudia Kim in the upcoming film, is a Maledictus, who befriends Credence, played by Ezra Miller 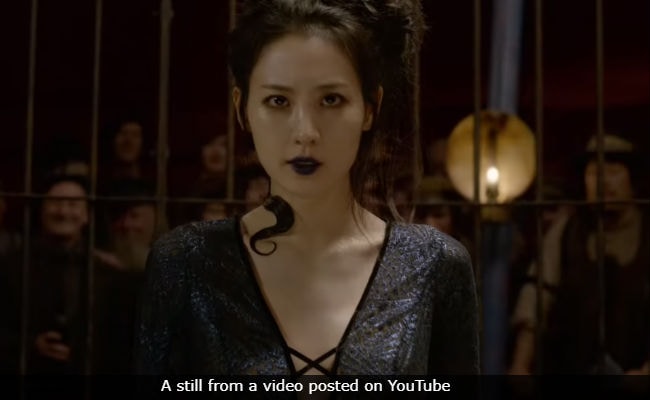 Claudia Kim in a still from Fantastic Beasts: The Crimes Of Grindelwald. (Image courtesy: YouTube)

The final trailer of Fantastic Beasts: The Crimes Of Grindelwald rocked the Internet on Wednesday after Potterheads discovered author JK Rowling's (creator of Potterverse) best kept secret - Nagini, Lord Voldemort's beloved snake also one of the horcruxes, was a woman. Yes, that's right. After the Internet had a mini heart attack, JK Rowling had a field day on Twitter explaining the existence of Nagini. Replying to a fan on social media, JK Rowling revealed that Nagini, played by actress Claudia Kim in the upcoming film, is a Maledictus, a cursed woman who can take the form of an animal at will until one day when it transforms permanently.

Not an Animagus. A Maledictus. Big difference. https://t.co/JwVVNnvVQU

They're different conditions. Maledictuses are always women, whereas werewolves can be either sex. The Maledictus carries a blood curse from birth, which is passed down from mother to daughter. https://t.co/wYfvPeQFRW

Only for around twenty years. https://t.co/gZadgWVREN

Nagini's big secret was definitely the highlight of the trailer but it had some super Fantastic moments too. We also get the answer to the question Harry Potter asked Dumbledore in Philosopher's Stone. Now we know, Dumbledore sees his friend-turned-arch nemesis Grindelwald (not socks!) in the Mirror of Erised. Is this the reason why Dumbledore, played by Jude Law, delayed meeting Grindelwald (Johnny Depp)? Dumbledore famously defeated Grindlewald in 1945 ending the global wizarding war.

Meanwhile, Ezra Miller returns as Credence, who was apparently destroyed in the first film by the American Ministry of Magic. However, it appears that Credence is alive and in the events of the film, he relies most on Nagini.

Watch the trailer of Fantastic Beasts: The Crimes Of Grindelwald:

We meet Leta Lestrange (Zoe Kravitz) and Theseus Scamander (Callum Turne) in the trailer. For the uninitiated Newt was in love with Let when they were studying in Hogwarts and he took the blame for Leta's misdemeanor, which resulted in his expulsion from Hogwarts School of Witchcraft And Wizardry. However, in the events of The Crimes Of Grindelwald Leta is engaged to Newt's auror brother Theseus.

Katherine Waterston and Alison Sudol reprise their roles of Goldstein sisters while Dan Fogler as Jacob Kowalski. Brontis Jodorowsky will be seen in the role of alchemist Nicolas Flamel, a close friend of Dumbledore.

The events of Fantastic Beasts film series are set decades before the arrival of Harry Potter. The five-part film series focusses on the defeat of Gellert Grindlewald orchestrated by Albus Dumbledore with the help of magizoologist Newt Scamander, played by Eddie Redmayne.

Fantastic Beasts: The Crimes Of Grindelwald releases on November 16.