"Everyone On This Movie Was Certifiably Insane": Vir Das On 10 Years Of Delhi Belly 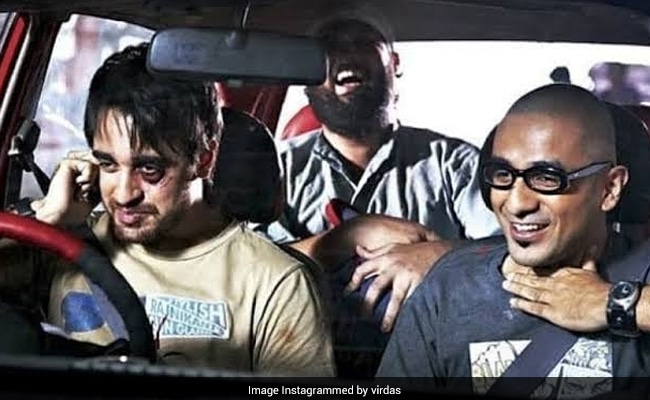 Filmmaker Abhinay Deo's one of the most loved films Delhi Belly clocked 10 years today. The film featured Imran Khan, Vir Das and Kunaal Roy Kapur in the central roles. On the 10th anniversary of Delhi Belly, actor-comedian Vir Das recalled working with the "certifiably insane" team of the movie. He dedicated an Instagram post to the 10 year anniversary of the film and shared a still featuring him with Imran Khan and Kunaal Roy Kapur. He complemented the picture with a note and recalled the "special feeling" with which he "joined the set" of the movie. "It was like my fifth audition for this crazy movie over two years. The first time the three of us read together. It just felt right, three idiotic kids basically," he wrote in the caption of the post.

"Eventually we joined a set with a special feeling, that we were making madness that we may never get to again. Top to bottom, cast to crew, everyone on this movie was certifiably insane. Awesome, amazing, crazy people. #10yearsOfDelhiBelly," he added.

As mentioned above,Delhi Belly was directed by Abhinay Deo. Besides the central trio of Imran Khan, Kunaal Roy Kapur and Vir Das, the film also featured Shenaz Treasury, Vijay Raaz and Poorna Jagannathan. It was produced by Aamir Khan Productions. Delhi Belly was released in 2011 and it was given an 'A' certificate for the expletives used in the film.

Coming back to Vir Das, he made his Bollywood debut in 2007 with the film Namastey London. He had a short guest appearance in the film. He later went on to work in films like Go Goa Gone, Shaadi Ke Side Effects and more. Besides being an actor, Vir Das is also known for his stand-up comedy. Some of his best known comic shows include Vir Das: For India, Jestination Unknown and Vir Das: Inside Out. He recently featured in Netflix's dark-comedy series Hasmukh.

"These Words Will Stay With Me Forever": Akshay Kumar Responds To PM Modi's Condolence Message After Mom's Death