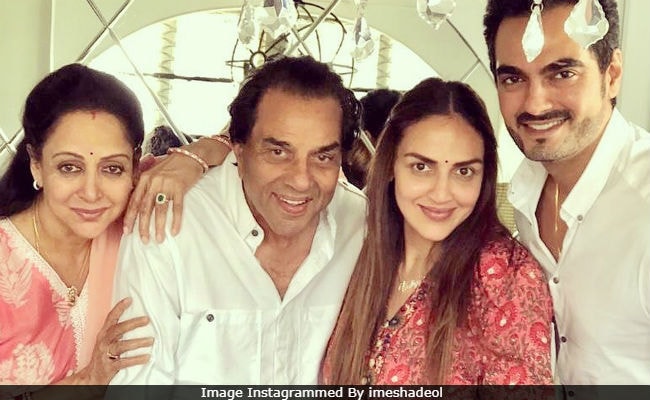 Actress Esha Deol, who on Monday announced that she is pregnant with her second child, told Mumbai Mirror how her parents Hema Malini and Dharmendra reacted to the news. "All the four grandparents are excited, for them the more the merrier," she said. Esha is married to businessman Bharat Takhtani. In 2017, the couple welcomed their daughter Radhya. Esha announced her second pregnancy on social media with a picture of baby Radhya. "I'm being promoted to big sister," read the text on the photo. "Both of us definitely wanted another baby as we grew up with siblings and wanted the same fun company for Radhya. The timing happened by the grace of God," the 37-year-old actress told Mumbai Mirror.

When Esha was expecting Radhya, she and Bharat Takhtani went to Greece for a babymoon, but for this time, she said, "I don't think I can call it a babymoon the second time around as I can't go anywhere without my baby. I will take Radhya with me everywhere I go so let's just call it a family vacation for Bharat, Radhya and me whenever we plan to travel."

Of balancing her personal and professional lives, Esha told Mumbai Mirror, "It's all about balancing work and personal life as I have certain responsibilities as wife and mother while also being passionate about my work." Esha and her sister Ahana often perform with their mother Hema Malini in dance recitals. Esha has also taken over from Hema Malini as Sita in the dance ballet Ramayana. "The ballet is still going on as planned. And I will resume my professional commitments after my second child is born, the way I did after Radhya entered our lives," she added.

Backstage fun with my little one #radhyatakhtani #ramayan#danceballet #sita #gratitude

Esha Deol has worked in films such as Na Tum Jaano Na Hum, Dhoom, Yuva, No Entry and Dus. She was last seen in the short film Cakewalk.