"I'm over here to tell you one thing - cancer is horrible in so many ways. But it has taught me so much," said Ayaan Hashmi 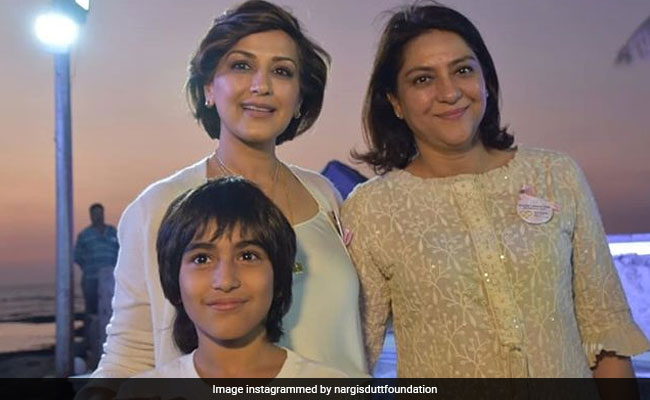 Emraan Hashmi's son Ayaan, a 10-year-old cancer survivor, has been trending for his heart-touching speech on World Cancer Day on Tuesday. On Wednesday evening, Emraan Hashmi re-shared the post Instagrammed by his wife Parveen Hashmi with these words: "Ayaan's talk for World Cancer Day at Carter Road Amphitheatre." Ayaan was speaking at an event organised by Sanjay Dutt's sister Priya Dutt for the Nargis Dutt Foundation, which was headlined by Sonali Bendre, also a cancer survivor. Thanking the organisers for giving such a platform to Ayaan, Parveen wrote: "Thank you Priya Dutt and Nargis Dutt Foundation for giving Ayaan this opportunity." Ayaan's speech, which you can hear in the videos below, put a smile on Sonali Bendre's face, who gave the young cancer survivor a standing ovation.

She also dedicated a post to her "youngest motivator" and wrote: "I met my youngest motivator, Ayaan Hashmi, who is just 10 years old and is truly a canvas of positivity! The way he spoke about his journey was far beyond his age!"

4th Feb 2020- An evening filled with hope, love, and conversations! I met my youngest motivator, Ayaan Hashmi, who is just 10 years old and is truly a canvas of positivity! The way he spoke about his journey was far beyond his age! You've got a warrior @therealemraan Give my love to Ayaan! @priyadutt kudos to you for being a pillar of strength to all those affected by the big C! It's truly commendable to see the work you're doing with @nargisduttfoundation and thank you for making me a part of this #WorldCancerDay

Ayaan began his speech by saying: "I'm over here to tell you one thing - cancer is horrible in so many ways. But it has taught me so much - how to be strong, joyful and enjoy life." Ayaan was diagnosed with cancer in 2014 when he was all of four and it's only in 2019 that Emraan Hashmi revealed that his son was cancer-free after five years of treatment.

Ayaan continued his speech with these words: "Cancer, that I told you before, is horrible. It's horrible. It hurts you mentally and physically but after I survived cancer, my whole life has changed. It taught me 'I was strong, I was a fearless leader'."

10-year old Ayaan ended his speech on an inspiring note as he said: "For (fighting) cancer, you only need a few qualities which I think everyone over here has. You need to be strong, fearless and a fighter. To end my speech, I will say one sentence: Cancer is curable. Thank you."

Speaking to Amitabh Bachchan on an episode of Kaun Banega Crorepati last year, Emraan Hashmi opened up about the difficult phase: "My son Ayaan's remission phase - during which the cancer might make a comeback - was a tough phase for us as we parents go through a lot of fear psychosis. The whole process is psychologically disturbing," IANS quoted him as saying.

Today, 5 years after his diagnosis Ayaan has been declared cancer free. It has been quite a journey. Thank you for all your prayers and wishes. Love and prayers for all the cancer fighters out there, hope and belief goes a long way. You can WIN this battle !!! #thekissoflife

On the work front, Emraan Hashmi was last seen in Netflix drama Bard Of Blood.