Emmys 2020: Record Nominations For Black Actors And Other Takeaways

"This type of representation is a long time coming. There's no shortage of talent within the black community," Yahya Abdul-Mateen II, a nominee for HBO's Watchmen said 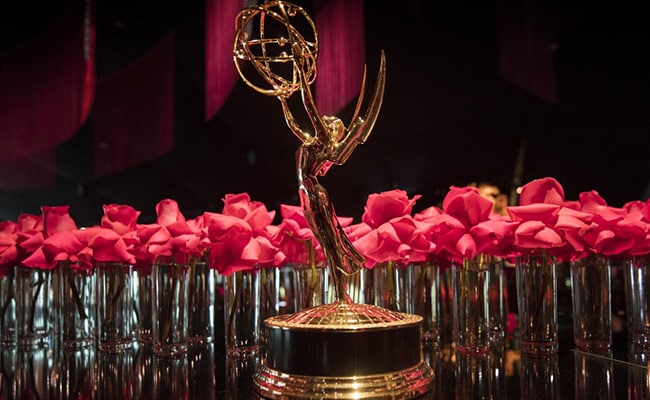 The Emmys will be handed out on September 20. (Image courtesy: AFP)

The Emmy nominations on Tuesday yielded a step forward for diversity, a new record for Netflix and nods aplenty for ESPN's popular Michael Jordan documentary. Here are some top takeaways form the announcement by the Television Academy, ahead of the Emmy Awards on September 20: Diversity - Of the more than 100 acting nominations in the series, limited series and television movie categories, more than a third of them went to black actors - a new record. Among them are Billy Porter (Pose), Sterling K Brown (This Is Us and The Marvelous Mrs Maisel), Issa Rae (Insecure) and Regina King (Watchmen). The increased number of nominations for black performers confirmed efforts by the Television Academy to boost racial diversity on the small screen. "Black Lives Matter. Black Stories Matter," the Academy tweeted Tuesday.

The Emmy nominations announcement comes amid a national reckoning over race, with protests against racism and police brutality taking place across the country. "This type of representation is a long time coming. There's no shortage of talent within the black community," Yahya Abdul-Mateen II, a nominee for HBO's Watchmen, told Entertainment Tonight. "Sometimes it takes certain circumstances in the world for people to open their eyes and people to open up, to widen their periphery." But while black and Asian actors made gains this year, the lack of any Latino actors in the mix was glaring.

The amount of television content eligible for Emmys increases just about every year, and this year, while Netflix earned a record 160 nominations, a few new streaming platforms earned their first nods. Disney+ made its mark with 19 nominations - 15 of them for its flagship series, the Star Wars spinoff The Mandalorian. Apple TV+ received 18 nominations, including for Jennifer Aniston, Steve Carell and Billy Crudup for its flagship launch program The Morning Show. The fledgling short-form streaming platform Quibi also scored 10 nominations, including for cop spoof revival Reno 911! and dystopian thriller Most Dangerous Game.

This Is Us actor Ron Cephas Jones and his daughter Jasmine Cephas Jones shared the limelight Tuesday as they both received Emmy nods. Ron Jones was nominated for outstanding guest actor for the NBC tearjerker, for which he won an Emmy in 2018. His daughter, who earned fame as a member of the original cast of the Broadway musical Hamilton, joined the club of Emmy nominees for her role in the Quibi drama #FreeRayshawn. "I'm still in shock! Thank you to @TelevisionAcad for this Emmy nomination!" Jasmine Cephas Jones said in a tweet, in which she also congratulated her dad. "Proud to be a part of important stories during this climate," she added.

The salacious Netflix series Tiger King, which was all the rage at the onset of the COVID-19 lockdown, will face off against The Last Dance, which revolves around basketball legend Michael Jordan's career with the Chicago Bulls, in the outstanding documentary or nonfiction series category. The two shows will compete against Hulu's Hillary, about failed presidential candidate Hillary Clinton, PBS's American Masters, which examines the lives of outstanding artists, and HBO's McMillion$, about the McDonald's Monopoly game scam.

The Last Dance, which also aired during the lockdown while professional sports leagues were forced to suspend play, was the most-watched documentary ever on ESPN. "I'm so proud of our entire team, who worked tirelessly for years to make The Last Dance what it was," director Jason Hehir said. "I am beyond grateful for their expertise, their dedication and their perseverance amidst unprecedented circumstances as we finished the show in the early stages of this pandemic."