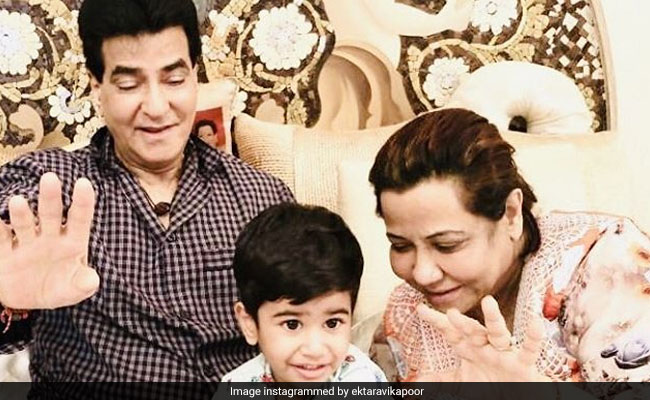 TV czarina Ekta Kapoor plugged in a hilarious reference to Halloween on her parents Jeetendra and Shobha Kapoor's 44th wedding anniversary. On Wednesday, Ekta Kapoor shared an adorable family picture in which Jeetendra and Shobha Kapoor can be seen playing with their grandson Laksshya. The 43-year-old producer accompanied the photo with a message for the couple, which read: "Happy anniversary! It's Halloween but you guys chose this day to get married! Well marriage (apparently) is no less than a scary movie! As long as someone goes through it with you I guess it's fine ! Me and Tusshar are like the popcorn and coke that came along! And laqu is the happy twist in the end." Veteran actor Jeetendra married Shobha Kapoor in 1974 and they became parents to daughter Ekta and son Tusshar. They became grandparents to Tusshar's son Laksshya, who was born in 2016 via surrogacy.

Happie anniversary!!! It's Halloween b u guys chose this day to get married !!! Well marriage ( apparently) is no less then a scary movie! As long as some one. Goes thru it with u I guess it's fine !!! Me n Tush r like d popcorn n coke that came along!!! N laqu is d Happie twist in d end

Ekta Kapoor is a doting bua and she is often seen documenting her love for nephew Laksshya on social media.