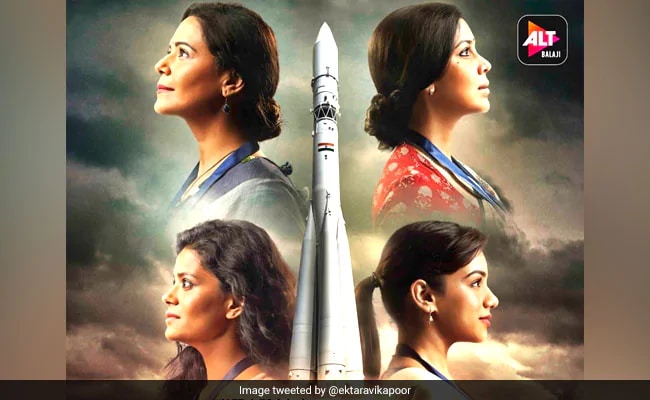 Digital platform ALTBalaji on Wednesday said the image of rocket used in the poster of their upcoming web series M.O.M - Mission Over Mars was taken for "representation purposes purely" as they were "legally bound" not to use actual pictures or details. The poster, released last week, featured what appears to be a Russian Soyuz launch vehicle with the Indian flag superimposed on it. ISRO's Mars Orbiter Mission (MOM), also called Mangalyaan, on the other hand, was launched aboard a Polar Satellite Launch Vehicle (PSLV) rocket C25.

According to ALTBalaji, the parties attached to the show decided to take a "fiction route" as a "strategic call". "Our upcoming show is a fictional adaptation of the real life heroes at ISRO who worked on Mangalyaan and set a major milestone putting India firmly on the global map. However, as a strategic call taken by multiple parties, we have gone down the fiction route for this show. "Additionally, we are legally bound not to use actual names or images of either the people, objects or agencies involved. Keeping in mind our contractual obligations, publicity material of the show was designed," a statement from ALTBalaji read.

"This imagery was taken for representation purposes purely, as a part of which, publicity material of the show has its own sensibilities to consider," the statement further read.

In a tweet last week, producer Ekta Kapoor had announced the launch of the show that revolves around the story of four women scientists who were involved in India's Mars Orbiter Mission launched in 2013. Kapoor wrote she had decided to make the show two-and-half years ago when she chanced upon the "amazing story about women in Indian science." "This show is on the women who sent the mission on Mars -- partly fictional keeping in mind the sacrosanct nature of ISRO," she wrote.

Thankyou very much 4 all d birthday wishes
I am in a low network area & is difficult 2 respond to each one of you but I will do so once m back #MissionOverMars streaming soon on @altbalaji#ALTBalajiOrginal#ShobhaKapoor#MonaSingh#SakshiTanwar@Nnidhisin@PalomiGhoshpic.twitter.com/A1SEI3CIdY

According to her tweet, the show was being presented after "millions of meetings with ISRO" and would maintain a "certain amount of sacrosanct secrecy." The series is "part-fiction, part real story" based on the achievements of all the women in Indian science, her tweet said.

(Except for the headline, this story has not been edited by NDTV staff and is published from a syndicated feed.)
Comments
ALTBalaji showsm.o.m-mission over marsM.O.M Poster rocket