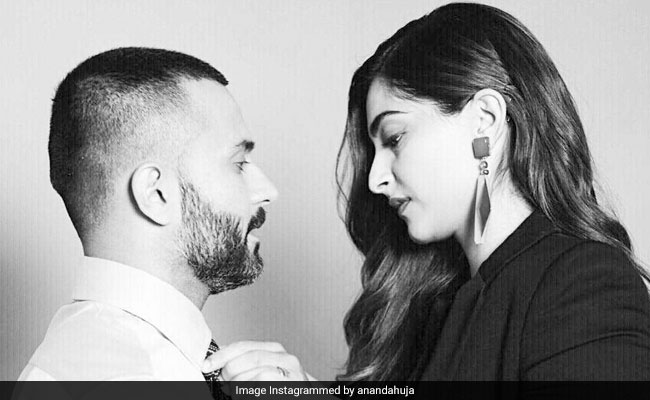 We are eagerly waiting for Sonam's response. Meanwhile, check out Anand Ahuja's post:

Sonam Kapoor, who plays the lead role in the Shelly Chopra Dhar-directed film, accepted the challenge earlier this week. She shared a picture of herself along with her filmmaker sister Rhea Kapoor and wrote: " Ek ladki ko dekha toh aisa laga jaise my sister is the smartest wisest person I know! Love you Rhea Kapoor. Tag that special ladki in your life!"

Anil Kapoor, who is credited for starting the Ek Ladki Ko Dekha challenge, shared a picture of himself along with his wife Sunita Kapoor on Monday and wrote: "Ek ladki ko dekha toh aisa laga jaise strong, loving, boss lady... Sunita Kapoor my lifeline, my heart, my home!"

Sonam's cousin Arjun Kapoor also accepted the challenge and he shared a throwback picture of himself along with Sonam. ICYMI, here's the post:

Me trying to get this Ladki's attention since childhood & (swipe right) her finally noticing then looking straight at the camera & not me !!! @sonamkapoor from the time I remember u will always be the first ladki in my life that I loved hanging out with... so proud of u & @anilskapoor for going out on a limb & choosing a script u believed in beyond the perceptions of the so called world. Ur courageous ur beautiful. Proud to have a sister like you. Stay the child at heart that you are & most importantly all the best for 1st feb #ekladkikodekhatohaisalaga

Ek Ladki Ko Dekha Toh Aisa Laga is an unusual love story which has been directed by Shelly Chopra Dhar. The film will open in theaters on Friday. The film stars father-daughter duo Anil Kapoor and Sonam Kapoor, who will be seen sharing screen space for the first time. The film also features Rajkummar Rao and Juhi Chawla.