"Don't Take This Virus Lightly": A PSA From Abhishek Bachchan, Speaking From Experience

"Whenever you go out or you are with somebody, keep your mask on, guys. It's important," Abhishek Bachchan said 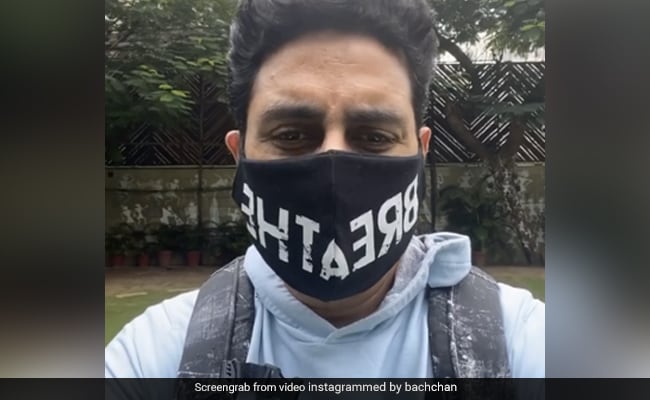 Abhishek Bachchan in a still from the video.(courtesy: bachchan)

Actor Abhishek Bachchan, a COVID-19 survivor, has shared a post on his social media accounts urging everyone to wear their masks and not "take the virus lightly." On Instagram, Abhishek shared a clip of himself saying, "Whenever you go out or you are with somebody, keep your mask on, guys. It's important." Yes, he is wearing his own mask in the post. He hashtagged his post #SpeakingFromExperience - Abhishek Bachchan was in hospital for nearly a month after testing positive for the Coronavirus; he was discharged on August 10. The 44-year-old actor's public service announcement arrives as coronavirus cases spike in the country.

India is currently the second worst-hit country in the virus case count, just behind USA, and just saw it's highest single day surge in both COVID-19 cases and related deaths.

Almost the entire Bachchan family tested positive for COVID-19 in July - Amitabh and Abhishek Bachchan were taken to Mumbai's Nanavati Hospital on July 11; a day later Abhishek's wife Aishwarya and their eight-year-old daughter also tested positive - they isolated at home for a week before being moved to hospital. The Bachchan residence Jalsa and adjoining properties were sealed by the Brihanmumbai Corporation or BMC.

Aishwarya was discharged from hospital on July 27; days later, on August 2, Amitabh Bachchan followed. Abhishek, however, ended up staying in hospital for 29 days before finally testing negative and being allowed to go home.

Abhishek Bachchan was last seen in the second season of the web-series Breathe, making his digital debut. His line-up includes The Big Bull, which will release on an OTT platform, and Bob Biswas, based on the fan favourite hitman in the film Kahaani. Abhishek's father Amitabh Bachchan returned to work recently and has been sharing pictures from the filming of the new season of game show Kaun Banega Crorepati