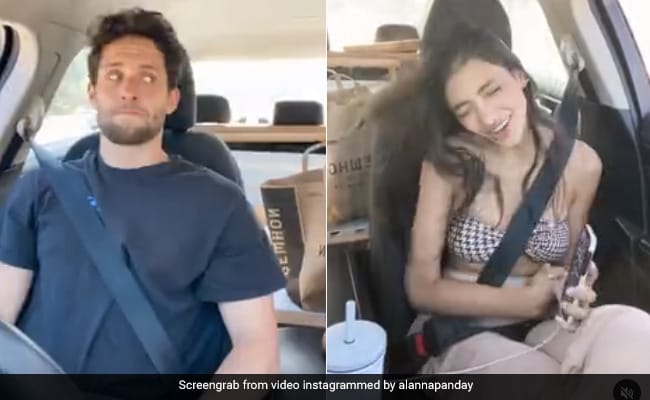 Alanna Panday and Ivor in stills from her video (courtesy alannapanday )

Car singers here, raise your hands because model Alanna Panday just joined the club. Alanna Panday's recent Instagram video is the much needed laughter therapy you have been waiting for. Alanna recently shared an Instagram video in which she can be seen singing one of her favourite songs in the car - Good For You by Olivia Rodrigo. Behind the wheels is Alanna Panday's boyfriend Ivor. As Alanna starts singing, Ivor looks at her suspiciously and then within few minutes, gives in and joins the party. Ivor may have had a good time with Alanna in the car but he clearly didn't want his friends to see his head-banging avatar, so he dropped a few ROFL comments in his defense. In the comments section, Ivor wrote: "Don't show this to my friends" but Alanna didn't listen.

She not only pinned Ivor's comment but also tagged his friends instead and wrote: "Oops I tagged them." ROFL comments from Ivor's friends read: "Oh no... we lost a good one today," prompting this hilarious response from Ivor: "I don't even think that's me." 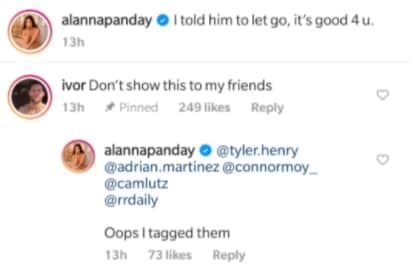 Alanna Panday, who lives in Los Angeles with Ivor, also often trend for her loved up posts for her boyfriend. Here are some of them from their recent vacation to Tulum.

Alanna Panday is the cousin of Ananya Panday. Alanna is the daughter of celebrity fitness expert Deanne Panday and Chikki Panday, Chunky Panday's brother. In a recent video on her YouTube channel, Alanna was asked if there was any convincing required for her parents to accept her moving in with Ivor, when she said: "Parents are super open-minded about everything. Not just about living with Ivor, I think my parents are super open-minded in general. So, there was no convincing. I just called them one day and said: 'Hey guys, this is the guy. I love him. We are staying together'."