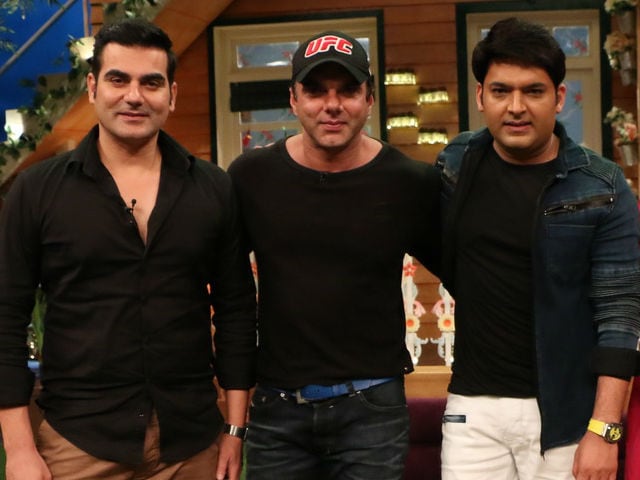 Sohail and Arbaaz Khan photographed with Kapil Sharma in Mumbai.

Arbaaz Khan backed Kapil and said that one should have freedom of expression in this country. "But when we express something the people get behind our back with all sorts of questions about how can we say it. If we really have that right then how can anyone question about whatever we say," he said.

"We should allow the people to say anything even if we do not feel his opinion is right and then we can leave it without paying any attention, but what's the need to crucify him," Arbaaz added.

Asserting that one should not misinterpret the remarks made any individual, Arbaaz wondered why people become so intolerant despite making tall claims about India being a tolerant country.

"I think everyone has an opinion about the ongoing political and social agendas and they should be ready to face the consequences of their opinion," he said.

Sohail Khan, the director of Freaky Ali, not just justified Kapil's comment but also praised him for putting his perception before the society.

"Actually it is the media's job to expose things. And if he despite not being in the media exposed something then why is he to be blamed. He is rather doing an important job for which he should be praised. At least he brought out something that could help the society or else why would he bother to give fake news," said Sohail.

"There would be some element of truth behind it and that is why he pointed it out on a social platform. And I am sure that he would also be ready to prove his claims because he is not a mad man who would speak anything," he added.

The controversy started after Kapil Sharma in a tweet alleged that he had been asked to pay a bribe of Rs 5 lakhs by an official of the Brihanmumbai Municipal Corporation (BMC).

Promoted
Listen to the latest songs, only on JioSaavn.com
The Maharashtra Navnirman Sena (MNS) has filed a complaint against Kapil for allegedly violating building norms.