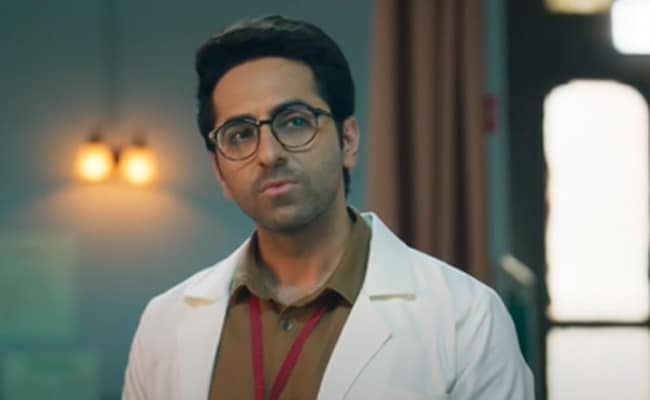 A still from the video. (courtesy: Junglee Pictures)

Finally, the makers of Doctor G, starring Ayushmann Khurrana and Rakul Preet Singh, have dropped the trailer. In the trailer, Ayushmann, who plays the role of Dr Uday Gupta, struggles to be a gynaecologist as he understands that women are not comfortable with male gynaecologist doctors. In the film, he has to lose the "male touch" to treat women. The trailer starts with Ayushmann being beaten up by a patient's husband at a clinic. Ayushmann, who is not comfortable treating females, in the next scene, can be seen requesting a fellow college mate to switch the subject from him as he doesn't want to be a gynaecologist and wants to study Orthopedic. However, the woman refuses and asks the reason, to which he says, "Jo mere pass hai hi nahi uska illaj kaise karuinga (How can I treat body parts I don't have," leaving everyone stunned.

Shefali Shah, who plays the role of Dr Nandini, a gynaecologist and Uday's teacher, helps him out of this notion. She advises him to "loose the male touch," and treat his patients seriously. The trailer ends with Ayushmann committing a mistake while treating a patient.

Watch the Doctor G trailer below:

Helmed by Anubhuti Kashyap, Doctor G will hit the theatres on October 14.