The Radhe actress is seen busy on her phone in the new post. 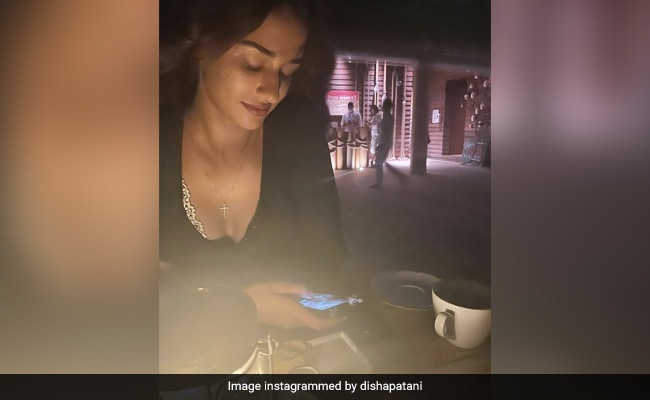 Actress Disha Patani was born to be a star and if you have any doubts about this, her latest pictures will put them to rest. The Radhe star, who is known for her killer dance moves and glamorous looks, showed us that she is just as stunning in her unguarded and unfiltered moments, in a recent Instagram post. In the photo, the actress is seen sitting in what is presumably a cafe and seems busy on her phone. With a face bereft of makeup, and hair left open, the actress is glowing in the warmth of a candle placed on the table.

Well, Disha looked like an absolute goddess and her fans lost no time in telling her that. The actress' sister, Khushboo Patani also seemed to approve of the photo and wrote, "Cute." While several fans left heart emojis in the comment section, one follower said, "You are so beautiful."

Recently the actress also gave her fans a look at the lovely time she spent at a beach. The photo that features her silhouette amid the stunning waters left fans extremely impressed. "Role model," said one fan and looking at Disha's fitness levels we cannot help but agree.

Disha also often shares videos of herself pulling off some tough moves in the gym. In one such clip, the actress can be seen doing a backflip from an elevated structure and she aced it with a smooth landing. "Wish this would feel more like butter," she wrote in the caption. Replying to the post, director Punit Malhotra said, "Wow!" Disha's rumoured beau, actor Tiger Shroff too chipped in to say, "Clean." Tiger Shroff's mother Ayesha Shroff was also left impressed with Disha's skill. She wrote, "Wow Deeeshu."

Take a look at some of her other amazing fitness videos:

Disha Patani made her debut with the Telugu film Loafer, opposite actor Varun Tej in 2015. In Bollywood, she first appeared in the 2016 sports biopic M.S. Dhoni: The Untold Story. In it, she was seen alongside late actor Sushant Singh Rajput. Following this, she made a mark in films such as Baaghi 2, Bharat, Malang and the Chinese film Kung Fu Yoga alongside Jackie Chan. She will be seen next in Ek Villain Returns.