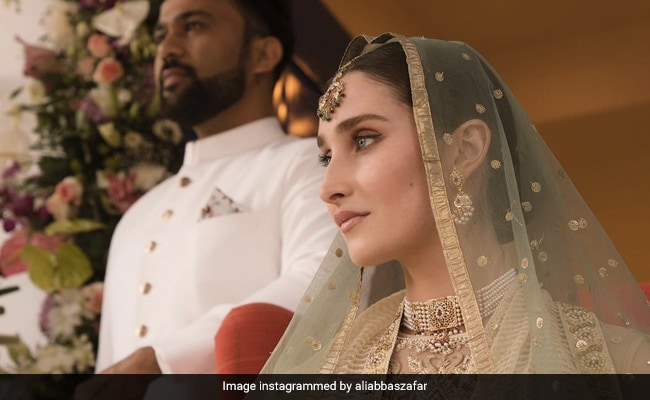 Director Ali Abbas Zafar has been trending since Monday, courtesy pictures from his wedding. The Bharat director sent his fans into a tizzy on Monday when he announced his wedding in an Instagram post. Now, a few days later, he shared a new picture of himself and his wife Alicia from their big day and it is simply stunning. Ali Abbas Zafar looks handsome in a white sherwani while Alicia looks every bit of elegant in a cream and pastel green bridal outfit. Sharing the photo, Ali Abbas Zafar wrote nothing and just accompanied it with a red heart icon. Take a look:

Earlier this week, Ali Abbas Zafar surprised his fans with a wedding picture. "Mine for life," read a part of his caption. Ali Abbas Zafar's friends from the industry congratulated him in the comments section of his post. "Congratulations!! So beautiful!" commented Ananya Panday while Priyanka Chopra wrote: "Congratulations, Ali!" Check out the aforementioned photo here:

Ali Abbas Zafar and Alicia's wedding album has one more picture that features his parents. "Welcome to the family," the director wrote while sharing the photo. Take a look:

Ali Abbas Zafar has directed Salman Khan in several hits such as Bharat (which also starred Katrina Kaif and Disha Patani), Sultan, co-starring Anushka Sharma, and Tiger Zinda Hai. He is also known for helming Gunday, featuring Ranveer, Arjun and Priyanka Chopra, and Mere Brother Ki Dulhan, among many others. Ali Abbas Zafar is also a screenwriter and a producer.