Did Beyonce And Jay-Z Save Their Marriage By Becoming Each Other's Favorite Rapper?

The couple introduced Everything Is Love, a surprise album of duets recorded under their family name, the Carters 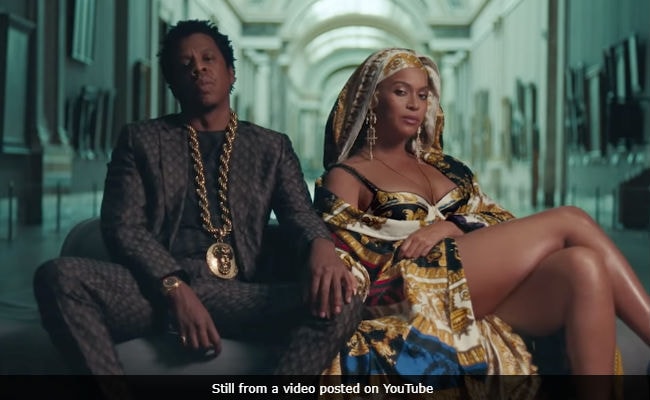 Beyonce and Jay-Z in a still from the song in Everything Is Love. (Image courtesy: YouTube)

So what exactly happened to Beyonce and Jay-Z in couples therapy? It's been two summers since the splashdown of Beyonce's Lemonade, that magnificent, planet-eating album that, among other things, broke the news of her husband's infidelity in song. Fourteen months later, Jay-Z stepped forward with his intimate, introspective, repentant4:44. Then, on Saturday night, the couple introduced Everything Is Love, a surprise album of duets recorded under their family name, the Carters - and as pop recordings go, it feels unprecedented simply because it exists. Think about it. Two of the most resonant voices of our time have decided to repair their marriage through music, in public, together.

Individually, they still loom extra-larger than life. For Jay, his odyssey from the block to the boardroom continues to inform his every rhyme, but he also has evolved into an exceedingly likable dad who can rap the word "sheesh" with impunity. Meanwhile, Beyonce keeps inventing new ways to present herself as Wonder Woman one minute, Everywoman the next. And there's still so much self-awareness and bigheartedness in that pivot. She knows that utopians need to stand alongside the rest of us for their vision to mean anything. And if that weren't enough, the Carters have also figured out how to transpose their cataclysmic marital strife into colossal music - an alchemy that surely only freakish superhumans can perform.

Just don't let that album title trip you up. Yes, they've patched things up thanks to the help of their friends (Friends) and a few tropical getaways (Summer), but for an exercise in public reconciliation, Everything Is Love feels much bigger than an interview on Oprah's couch. Because even as these two try to protect each other's healing hearts, the injustices of the outside world keep making them ache.

Listen to the boom-and-wail of Black Effect as they take turns hyping an imaginary crowd with a sweet-and-sour refrain: "Get your hands up high like a false arrest/Let me see 'em up high, this is not a test." Got that? Throw your hands in the air, and wave 'em like you just don't care, but don't forget that this is still America, where racial oppression seeps into every last thing, including your revelry.

Things go even more mercurial during the dizzy hook of Nice, which sounds like it's being sung by a solitary brain trapped in an argument with itself. "I can do anything," sings the optimistic lobe. "Hell naw, hell naw, hell naw, hell naw," sneers the other. And back and forth it goes while Jay rhymes about the lifestyles of the rich, the famous and the racially profiled. By the end of the song, he's "running from the lights." Is he talking about the flash of the paparazzi? Or the reds and blues that go woop-woop on a cop car?

Beyonce's rapping is far less ambiguous, and yes, she's spitting all over these songs with flagrant gusto, routinely outshining her spouse - something that should surprise absolutely no one, including him. And regardless of how the inner machinations of their marriage are chugging along, these two are obviously in love with each other's rapping. "My great-great-grandchildren already rich," Beyonce purrs on "Boss," outlining their family legacy with a half-smile. "That's a lot of brown chil'ren on your Forbes list."

Like the conscientious musical partner he's proved himself to be, Jay quietly steps aside whenever his wife is on a tear - and if she decides to catch her breath, he's standing by, singing her praises, cheering her on. "She don't even need a whole name," he brags during Heard About Us," the album's most effervescent two-way ego trip.

In moments like these, it feels easier than ever to relate to Jay-Z. He's a Beyonce fan, too.

(This story has not been edited by NDTV staff and is auto-generated from a syndicated feed.)
Comments
beyonce jay zeverything is lovebeyonce jay z combined album