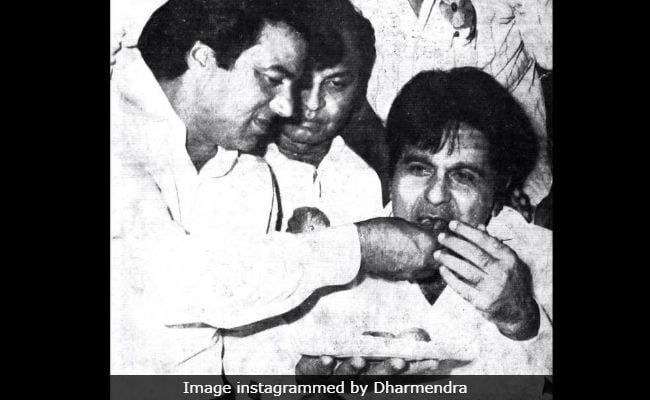 New Delhi: Dharmendra has a treasure trove of throwback pictures and he shared one on Tuesday, featuring his Anokha Milan co-star Dilip Kumar. The photo shows Dharmendra helping Dilip Kumar end his Roza fast during Ramzan. However, Dharmendra did not share the time frame of the photo. "Maha-E-Ramzan ki mohabbat bhari ek shaam apne bade bhai ka roza khulwate hue," Dharmendra captioned the photo. Dilip Kumar was born Muhammad Yusuf Khan and he was rechristened by Bombay Talkies' Devika Rani, who launched him in Jwar Bhata (1944). Eight months ago, Dharmendra had shared an old picture of himself and mentioned in the caption that there was time when he wondered if he could ever be Dilip Kumar.

But first, take a look at Dharmendra's Tuesday post:

Promoted
Listen to the latest songs, only on JioSaavn.com
When Dharmendra set foot in Bollywood in 1960, Dilip Kumar was an established actor with films such as Devdas, Madhumati, Naya Daur, Andaz and Gopi on his resume. Their only film together, titled Anokha Milan, featured Dilip Kumar in a cameo role.

More than five decades later, Dharmendra is an important part of Indian cinema's evolution. He has made popular films like Sholay, Mera Gaon Mera Desh, Chupke Chupke, Do Chor and Aadmi Aur Insaan among many others. Dharmendra is currently filming Yamla Pagla Deewana 3 with his sons Sunny and Bobby Deol.