Dhanush's Maari 2 First Look Is Crackling Like A Diwali Pataakha

In Maari 2, Malayali actor Tovino Thomas has been cast as the antagonist opposite Dhanush 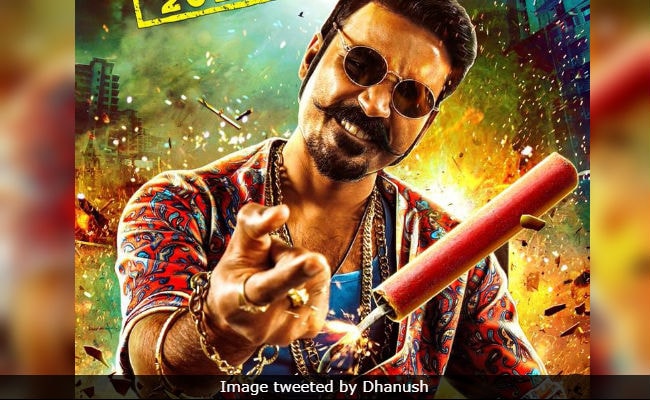 Dhanush is all set to return with the sequel of his 2015 hit film Maari, in which he played the role of a loveable gangster. Dhanush shared the first look of his film, one day before the trailer of his superstar father-in-law Rajinikanth's 2.0, will release on social media. In the vibrant poster of Maari 2, Dhanush poses in possibly the most OTT outfit with a swag overloaded expression as he swings a firecracker towards the viewers. Dhanush has teamed up with director Balaji Mohan once again while the film will be backed by Dhanush's Wunderbar Productions. Meanwhile, Sai Pallavi has replace Kajal Aggarwal in Maari 2 because at the end of Maari, Dhanush declined Kajal Aggarwal's marriage proposal.

Here's the first look of Maari 2:

The naughtiest don is back. #Maari2FirstLook#Maari2#tharalocal#senjuruvenpic.twitter.com/i4NdjhiX54

Actors Robo Shankar and Kalloori Vinoth will reprise their roles of Sanikilamai and Robert, respectively, while Malayali actor Tovino Thomas has been cast as the antagonist opposite Dhanush. The filming of Maari 2 completed in August this year and it will open in theatres in December this year.

In June, Dhanush was also injured while filming Maari 2 but he had tweeted that it wasn't a major injury and he resumed filming soon.

Dhanush was last seen in Vada Chennai, directed by Vetrimaran and before that in The Extraordinary Journey of the Fakir, which was his first international project. In addition to Maari 2, Dhanush is looking forward to the release of Enai Noki Paayum Thota, co-starring Rana Daggubati and Megha Akash.