Salman Khan said he "can't afford that luxury of being depressed" 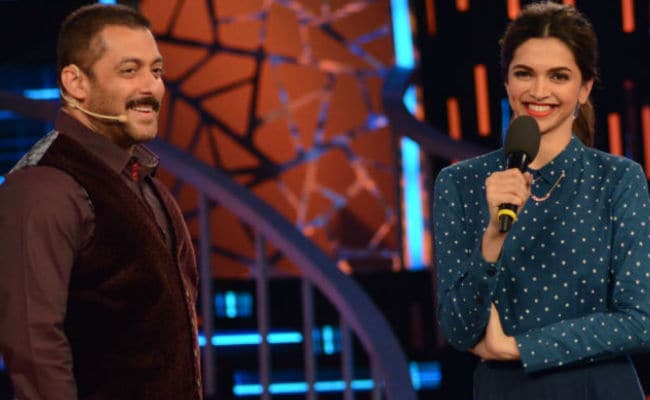 Deepika Padukone and Salman Khan on the sets of Bigg Boss.

New Delhi: Deepika Padukone has opened up about her battle with depression on countless occasions and the 32-year-old actress has always emphasised on the need to 'break certain myths' around mental illness. One such myth is that "depression is sometimes perceived as luxury," she said at an event in New Delhi. The last time the words 'depression' and 'luxury' were used in the same sentence was by Salman Khan. In February, the 52-year-old actor had said: "I see a lot of people getting depressed and emotional, but I can't afford that luxury of being depressed or sad or emotional because no matter what I am going through, it works against me." The statement 'worked against' him - but more about that later.

Earlier this week, Pinkvilla quoted Deepika Padukone as saying: "I want to clarify that it can happen to anybody from any field, irrespective of their socio-economic background. Depression is sometimes perceived as a luxury. People think that those who have too much time or money get into depression. I think it is very important to break that myth." Deepika's statement went viral and a section of Twitter backed the actress, saying, "Thank you, Deepika... Depression is definitely not a luxury." Another comment read: "Salman and his fans can learn a thing or two from Deepika." One Twitter user said: "Isko (Salman Khan) depression ka matlab bhi nahi pata hoga."

Salmon and his fans can learn a thing or two from Deepika.

Promoted
Listen to the latest songs, only on JioSaavn.com
The Internet was not impressed with Salman Khan for assuming depression is 'luxury.' "Last time I checked, it was a mental illness not a luxury," a tweet read. "Depression is not a joke, it's a serious illness and this man makes a joke of it," wrote another angry Twitter user.

"Salman Khan can't afford the luxury of being depressed." Last time I check it was a mental illness not a luxury. So now mental illness is considered luxury? Does he even think before making such statements!

can you believe salman khan said that depression is a luxury that he can not afford and y'all will find a to say "but he's a mega super star", depression is not a joke, it's a serious illness and this man makes a joke of it? I can't pic.twitter.com/pPG1NwMstK

Salman Khan is currently filming Race 3 and he also has Ali Abbas Zafar's Bharat up his sleeve. Deepika Padukone was last seen in "Padmaavat."