Deepika Padukone Should Consider it a Compliment: 'Defence' of Cleavage Tweet 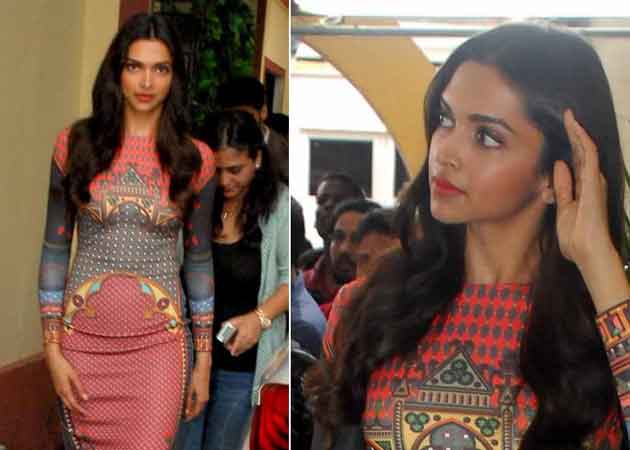 Deepika lashed out at the leading daily yesterday

Actress Deepika Padukone's very public dressing down of a 'news' report that urged the nation at large to have a good look at her cleavage has been answered by a defensive tweet from the daily that carried the offensive photograph of the Finding Fanny star.

After Deepika e-lashed out at a photo of herself captioned 'OMG: Deepika Padukone's cleavage show,' the leading daily has urged her to consider it a compliment. (Also Read: Deepika Padukone Slams 'News' Story: Yes, I Have Cleavage)

@deepikapadukone , It's a compliment! You look so great that we want to make sure everyone knew! :)

The original tweet is no longer on the daily's timeline.

The 'defence' from the leading daily was met with outrage from The Lunchbox actress Nimrat Kaur:

Dear @TOIEntertain...with this 'compliment' , I shudder to think who this 'everyone' is you're reaching out to ? pic.twitter.com/FHN9f3FL8m

YES!I am a Woman.I have breasts AND a cleavage! You got a problem!!??

Dont talk about Woman's Empowerment when YOU don't know how to RESPECT Women!

@deepikapadukone - we just slam ourselves back into the dark ages! Reputed channels inciting regressive shit. What are they thinking?! Sad!

We have hit a new low today...forget complimenting a woman have the ability to respect a woman first...

@TOIEntertain your response to @deepikapadukone was disgusting and so goddamn stupid! I'm so glad I discontinued my subscription a year ago

Well done @deepikapadukone ! Taken a stand for all of us. Xoxo

Appalled....shocked and disgusted at the level of disrespect shown..Deepika or any women in the world cannot and should not stand for this!!

More power to @deepikapadukone :-) dats how u shut them upppp

Just reading TOI Ent's coverage of @deepikapadukone Stunned. A new low. Well done, Deepika, for not letting it go. Neither shall we.

Thank you for this! About time! #RESPECT "@deepikapadukone: YES!I am a Woman.I have breasts AND a cleavage! You got a problem!!??"

An actor has just as much right to react to an image of their body as anyone does. Fame doesn't veto your gender or your self-respect.

If you are even remotely self righteous and want to do the right thing then SUPPORT @deepikapadukone. THIS WOMAN ROCKS.

Its a shame that this is what we do in the name of journalism.. More power to you @deepikapadukone ..

Proud of @deepikapadukone for standing up and speaking her mind. Too many others in this country would have sat on the fence and kept quiet.

More power to you @deepikapadukone !

SHOCKED what it takes to get ATTN @deepikapadukone: Supposedly India's 'LEADING' newspaper and this is 'NEWS'!!?? pic.twitter.com/hRZxrvalbH"

@deepikapadukone our Media needs to be more responsible & sensitive

So glad @deepikapadukone stood up to the low brow trash that garbs up as entertainment news. Have they not learnt what news & 'views' mean?

Does broadcasting not come with a responsibility? Where has the blue blood of entertainment reporting gone? Who are these rookies?

Cub reporters completely out of their depth. No lines of propriety. No sensitisation. Everything is fair game. Cleavage is entertainment?

Complimenting a lady is a grace reserved for gentlemen! I stand on a tall tall chair and applaud you @deepikapadukone

Deepika's film Finding Fanny is now showing in theatres and has been warmly welcomed by movie-goers and critics alike. She will next appear opposite Shah Rukh Khan in the Farah Khan-directed Happy New Year.