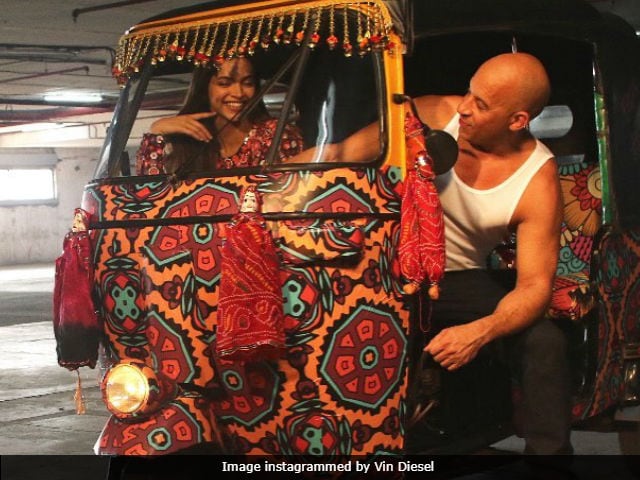 New Delhi: Clearly Deepika Padukone is Vin Diesel's favourite xXx: Return Of Xander Cage co-star and we think the 32-year-old actress was not joking when she told a French reporter at the Cannes Film Festival that "he's the one who's in love with me." Vin Diesel shared a throwback picture from the time when they promoted the film in India. In the picture, Deepika and Vin Diesel are all smiles, seated in a decked up auto rickshaw. Deepika is dressed in a fabulous Michael Kors floral printed dress. Take a look at Deepika Padukone and Vin Diesel's adorable throwback picture here:

Deepika Padukone will reportedly feature in the fourth instalment of the xXx series. Deepika has talked about Vin Diesel on several occasions like the aforementioned Cannes interview and The Ellen DeGeneres Show. At all times, she only praised her co-star. "He's adorable. He's just the most amazing person I've ever met. He's generous and kind. All the amazing experiences I had are because of him and his faith in me for what I could do for the movie. He is a friend for life," Deepika told France 24. To Ellen, she said: "We have amazing babies, but in my head." - can you believe it.

Deepika Padukone will be next seen in Bollywood film Padmavati. The first look of the film released on Thursday at the onset of Navratri celebrations:

Promoted
Listen to the latest songs, only on JioSaavn.com
Deepika plays the role of Rani Padmini in the Sanjay Leela Bhansali-directed film, which also stars Ranveer Singh and Shahid Kapoor. Deepika has also signed up for a project, which will be produced by Vishal Bhardwaj and co-starring Irrfan Khan.