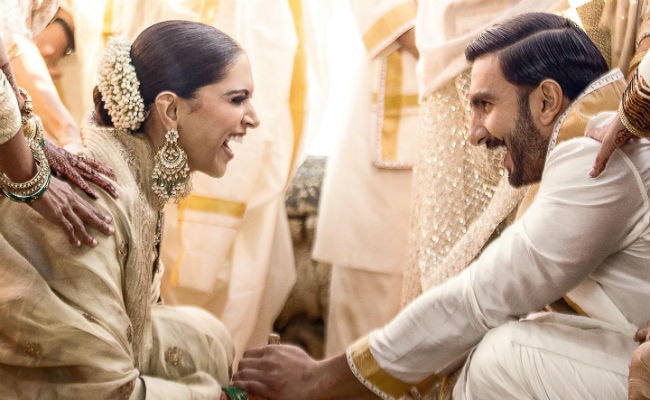 Deepika Padukone and Ranveer Singh photographed during their wedding

Like Karan Johar, actress Sonakshi Sinha had an epic response to Deepika Padukone and Ranveer Singh's wedding pictures, which the star couple shared this afternoon. Both Sonakshi and Karan want to get married after seeing their pictures. Well, well as if they just read our minds. "Haye nazar naa lage baba aur baby ko. Bas ab koi meri bhi kara do," she commented. Remember what KJo posted? "Uff I want to get married." Singles everywhere will probably relate to. Isn't it? This isn't over just yet. The Internet too has a similar reaction and comments like "I want to get married" and "koi shaadi kara do" have been posted.

Take a look at Sonakshi and Karan Johar's comments here.

Meanwhile, Deepika and Ranveer's photos are flooded with congratulatory messages from their celeb friends. Shraddha Kapoor commented used several heart emoticons to post her comment while Malaika wrote, "Too beautiful."

Farah Khan, who launched Deepika in Bollywood, used their film Om Shanti Om's dialogue, and wrote, "Finally, we know the keemat of ek chutki sindoor." Meantime, Arjun Kapoor had a hatke comment for Deepika and Ranveer. Rather than a congratulatory message, he wrote, "Nanaji, the epic photobomber."

Take a look at their pictures here.

Karan Johar, who was the first celebrity to congratulate the couple after their Konkani wedding, had also left a comment on Deepika and Ranveer's pictures, which read as, "Love and happiness forever, these are such full of pyaar-wala pictures. For those of us who don't have a life partner it's a very 'haiiiiiii' wala feeling."

Love and happiness forever.....these are such a full of pyaar wala pictures! For those of us who don't have a life partner it's a very "haiiiiiiiii" wala feeling! https://t.co/h1dtYel2be

Deepika and Ranveer married in Italy's Lake Como and after their two-day wedding festivities, they landed in Mumbai over the weekend. Right now, they are in Bengaluru, Deepika's hometown, and a wedding reception is scheduled for tomorrow. The Mumbai reception for the film fraternity will be held on November 28.