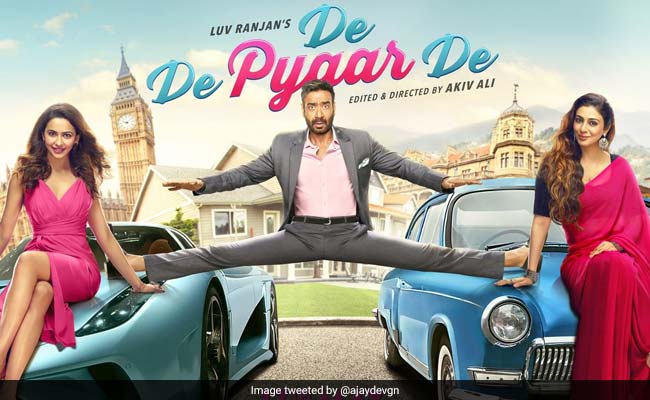 Ajay Devgn announced his new film - De De Pyaar De - along with a brand new poster of the movie, which was tweeted with a cautionary warning. The reason for that is Ajay Devgn recreates (sort of) his split stunt from 1991 film Phool Aur Kaante but this time with cars instead of bikes. As opposed to the original stunt, in which Ajay Devgn made a super confident entry on two bikes in Phool Aur Kaante, he sports a rather bewildered expression in the new poster. The poster of De De Pyaar De also features Ajay Devgn's co-stars Tabu and Rakul Preet Singh, who can be seen sitting on the two cars. "Don't try this at home! De De Pyaar De first look," Ajay captioned his tweet. Ajay Devgn's new film De De Pyaar De is scheduled to hit screens on May 17.

Don't try this at home!#DeDePyaarDeFirstLook

This is the second time in the recent past that we were reminded of the epic Phool Aur Kaante stunt. In February this year, Riteish Deshmukh attempted to troll Ajay Devgn over references to the many stunts he's performed so far. But guess who had the last laugh?

Ya just like how this bird is mine pic.twitter.com/SZRE4Cxzko

Ajay Devgn's action stunts were choreographed by Rohit Shetty in the 1991 film, with which he began his career in Bollywood. At just 17, Rohit Shetty worked as an assistant director for Phool Aur Kaante. Meanwhile, Ajay Devgn has recreated the above mentioned stunt in many of his films that followed, especially in the Golmaal series, also directed by Rohit Shetty.

Ajay Devgn is making a comeback with his goofy onscreen persona in De De Pyaar De, the trailer of which will be released on his birthday in April. De De Pyaar De is being directed by Akiv Ali and will be co-produced by T-Series and Luv Films.