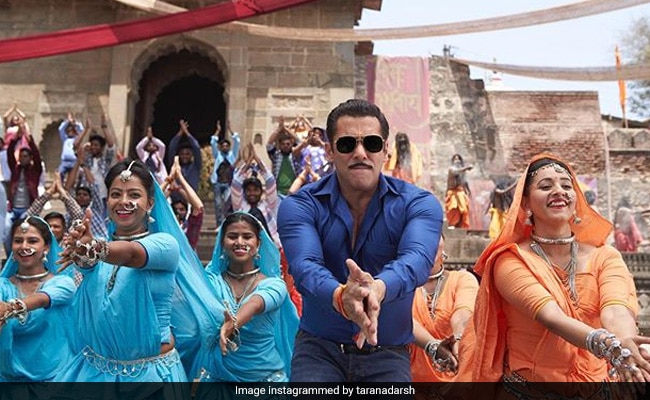 Dabangg 3 Box Office: Salman in a still from the film (courtesy taran_adarsh)

The box office happenings of Salman Khan's cop-drama Dabangg 3 got a "boost" on Christmas Day on Wednesday, reported trade analyst Taran Adarsh. On Christmas holiday, Dabangg 3 raked in a sum of Rs 15 crore, pushing the total amount to Rs 119 crore. However, Mr Adarsh added in his evaluation of Dabangg 3's box office report that as a Salman Khan movie and considering it was a big holiday like Christmas, Dabangg 3 "should have" fetched in more numbers. Here's what Mr Adarsh posted on Instagram: "Dabangg 3 gets a boost due to Christmas holiday on Day 6... However, the overall growth on a *big holiday* should've been more than what it is... Fri 24.50 cr, Sat 24.75 cr, Sun 31.90 cr, Mon 10.70 cr, Tue 12 cr, Wed 15.70 cr. Total: Rs 119.55 cr. India biz. Note: All versions."

Earlier, Mr Adarsh had said Salman Khan's Dabangg 3 is bracing up for a clash with Akshay Kumar's Good Newwz, which arrives in theatres on Friday: "Dabangg 3 also needs to sustain *after Week 1*, since it faces a new, big opponent [Good Newwz], which is expected to make a dent in its screens, shows and most importantly, market share... New Year holidays ahead should prove advantageous."

On it's opening day, Dabangg 3 made a collection of Rs 24 crore. He also compared the opening day collections of Salman Khan's releases of the past decade. Bharat topped the list with Rs 42.30 crore, followed by 2015's Prem Ratan Dhan Payo, Sultan and Tiger Zinda Hai.