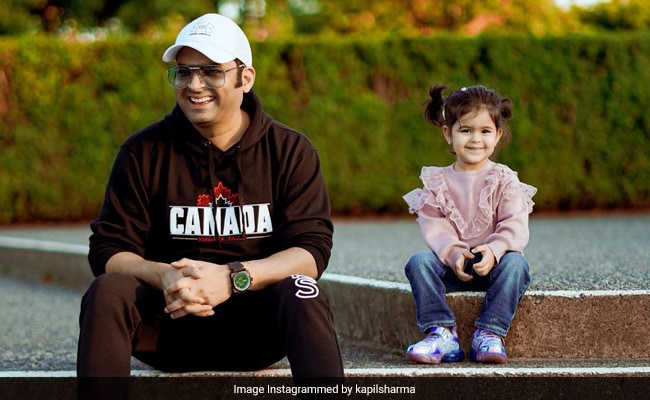 Hello, ladies and gentlemen, Kapil Sharma wants everyone to look at his little world. And, it revolves around one person. Any guesses? Well, it is none other than his daughter Anayra Sharma. Kapil has shared a photograph with the little one on Instagram. The father-daughter duo is sitting on the stairs. Warning: their smile is infectious. While Kapil looks away from the camera, his little munchkin poses effortlessly. Sharing the oh-so-adorable image with his Instagram family, Kapil wrote, “My little world”, along with a heart as well as blessed emoticons.

Have a look at the cute photo:

Kapil Sharma and Ginny Chatrath welcomed Anayra in  2018. The couple, who got married in 2018, are also parents to a baby boy, Trishaan. Kapil Sharma often shares some adorable snippets from the quality time he spends with his family. Take a look at the “the cutest pout” moment featuring Kapil and his little one, Anayra Sharma. Sharing the set of pictures, in which the two are pouting, the comedian wrote, “The cutest pout I have ever seen.” He also added a heart eye and star eye emoticons along with the hashtag “Anayra.”

Remember when Kapil Sharma dropped these too-cute pictures of Anayra Sharma on daughter's day? For the caption, he just wrote, “Happy Daughter's Day.”

On his son Trishaan's birthday, Kapil Sharma shared a bunch of solo pictures of the little boy. Note: don't forget the family portrait at the end.

Kapil Sharma is all set to make a comeback with another season of The‎ Kapil‎ Sharma‎ Show. Kapil made his OTT debut with the Netflix show - Kapil Sharma I'm Not Done Yet. He has also worked in films including Kis Kis Ko Pyaar Karu and Firangi.