Cinemas All Set To Reopen. Only Problem - No New Films To Screen 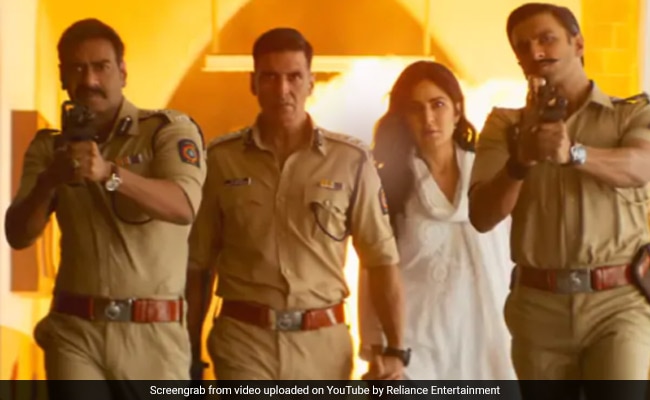 The government has given its green signal for cinemas to reopen in a new COVID-19 normal defined by rigorous dos and don'ts and theatre owners are getting ready too, but it may be a while before audiences get to see a new movie. On Tuesday, Information and Broadcasting Minister Prakash Javadekar announced the standard operating procedures (SOPs) that cinema halls must put in place before they open on October 15 after seven months of being closed. The SOPs include one seat distance in theatres, 50 per cent capacity, masks at all time, proper ventilation and air conditioner temperature settings at above 23 degrees Celsius. "Cinema halls have been shut for the last seven months. They are now opening from October 15. For the safety of people, we have come out with SOPs to be followed," Javadekar told reporters.

It was good news for multiplex and theatre owners who have long maintained that it was time for the curtains to go up and also for movie aficionados missing their big screen experience. But the wariness persisted. Was it safe? How many people would actually brave the threat of COVID-19? What about the cost factor involved in getting theatres ready for the corona era? Given the extreme caution, there is unlikely to be any fresh content in the next few months, industry insiders indicated. No one wants to take a chance.

Sibashish Sarkar, Reliance Entertainment Group CEO, said reopening of cinemas is a positive sign for the industry but screening new releases will be difficult. "We are not releasing any film on Diwali (on November 14)... It is not possible to release a film on Diwali now. As of now, all cinema houses are not opening from October 15. Even if it opens on November 1, how can you release a film in a 10 or 15-day notice period?" he asked.

Films such as Akshay Kumar and Katrina Kaif starrer Sooryavanshi and Ranveer Singh's 83 that are complete and ready for release won't be seen on the big screen anytime soon. While many films moved to OTT platforms during the lockdown that started in March, the much awaited Sooryavanshi and 83 did not. Sooryavanshi, which was scheduled to release on March 24, just a day before the lockdown came into effect, was supposed to hit the screens on Diwali. "We are not sure whether we will change both Sooryavanshi or 83 or we will just shift one film... It is clear... from December to March is the realistic timeline," Sarkar told PTI. In fact, some cinemas will screen old content even when they open.

Raj Bansal, a multiplex owner from Jaipur, said the distribution and exhibition sector has been waiting since August for theatres to open but his own theatre will stick to old fare. "We have 15 days to plan things. We have software for a few Dhoom series, Golmaal, Munnabhai..., Hera Pheri and some small films that are ready to be released in theatres, " Bansal told PTI. He said the cost of operating cinemas will go up by at least 10 per cent as the premises will need to be sanitised regularly. Cinepolis India CEO Devang Sampat is clear that cinema halls can't get back to regular business unless there is fresh content. He said they have implemented stringent safety protocols in line with global best practices and are ready to welcome patrons back to a safe and secure, world class movie experience. "We request the state governments to provide clearance for cinemas to open in their respective states," he added.

T-Series president Vinod Bhanushali added that it is exciting to have cinemas make a comeback after months of uncertainty. In Maharashtra and Tamil Nadu, theatres might open by November or pre-Diwali and the company is getting films ready for a theatrical release. The company has films such as "Indoo Ki Jawani" and the yet untitled biopic on badminton ace Saina Nehwal. "We will be happy if our films that are to be released on OTT will come in theatres. However, this decision is between OTT and exhibitors and distributors," Bhanushali told PTI. "We believe stars or superstars are made or born in theatres. The fun of watching films is on the large screen," Bhanushali told PTI.

Producer Boney Kapoor said it will take a couple of weeks for the audience to get used to coming to theatres. "Footfalls will increase gradually. Hopefully by Diwali, we should have a better understanding or how good the situation is. We will think of the release once we complete the shoot of our films. We are praying footfalls in theatres show positive signs," Kapoor told PTI. Film exhibitor Akshay Rathi, who has cinema houses in Chhattisgarh, Maharashtra and Madhya Pradesh, said the audience will want a safe and secure environment and all SOPs would be implemented. "We will ensure the best of movies are released in theatres for audiences to come in big numbers. For this producers, exhibitors and distributors will have to work together to rebuild the movie-going habit," Rathi told PTI.

Theatres across the country had to shut their doors in March due to the coronavirus-led lockdown. As the government started easing other businesses, theatre chains said they should be allowed to resume services as they were already facing losses to the tune of Rs 9,000 crore. "We are committed to ensure a safe, secure and a hygienic cinema going experience for the movie lovers of our country. As always, we would continue to assign topmost priority to the health and well-being of our guests and employees," said PVR Cinemas CEO Gautam Dutta. "We look forward to welcoming back moviegoers to a safe and an amazing brand new experience at our cinemas," he added.

INOX Leisure CEO Alok Tandon is also hopeful of a turnaround in the industry. "We are completely geared up and prepared for the new normal, which would assign topmost priority to safety and hygiene," Tandon said. Betting on the unique cinema culture of the country, Tandon said the announcement will help content producers chart a plan for their release. "India's unique cinema culture is something which makes us feel proud and optimistic at the same time. There is a huge amount of emotional, cultural and creative hunger prevailing in the country, which can now be satisfied with cinemas to a large extent. We know that the masses are yearning to step out and enjoy their favourite form of entertainment." In its unlock guidelines issued on September 30, the Ministry of Home Affairs had allowed the reopening of cinema halls from October 15.