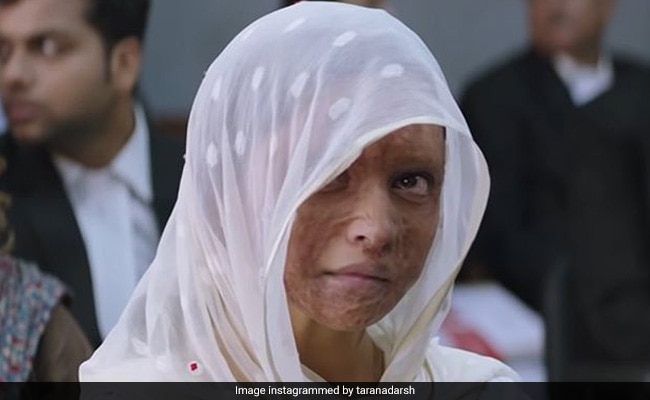 Chhapaak, which features Deepika Padukone as an acid attack survivor, failed to fare well at the box office on the opening day. The film, which also marks Deepika Padukone's debut as a producer, got an "ordinary" start on its first day and collected only Rs 4.77 crore, reported Bollywood trade analyst Taran Adarsh. Sharing the opening day performance of the film on social media, Taran Adarsh wrote that the film earned well at selected "high-end multiplexes" and is expected to show growth in numbers on second and third day. He wrote: "Chhapaak is ordinary on Day 1... Collects well at select high-end multiplexes... Business at Tier-2 and 3 cities and also mass circuits is way below the mark... Growth on Day 2 and 3 crucial for a respectable weekend total... Fri Rs 4.77 cr. #India business." Take a look:

#Chhapaak is ordinary on Day 1... Collects well at select high-end multiplexes... Biz at Tier-2 and 3 cities and also mass circuits is way below the mark... Growth on Day 2 and 3 crucial for a respectable weekend total... Fri Rs 4.77 cr. #India biz.

Chhapaak is based on the life of acid attack survivor Laxmi Agarwal, who is now a TV show host and a campaigner with Stop Acid Attacks. Deepika plays acid attack survivor Malti in the film. The actress has been garnering a whole lot of praise since the film opened in theatres on Friday.

Chhapaak opened to positive reviews on January 10. Reviewing the film for NDTV, Saibal Chatterjee wrote: "Director Meghna Gulzar and actor Deepika Padukone notch up a few points in this commendable effort to bring a horrific true story to the big screen."

Deepika's latest film has also been declared tax free in several states, including Rajasthan, Madhya Pradesh and Chhattisgarh. The Madhya Pradesh government will honour the actress at the IIFA Awards 2020, which will be held in the state in March. Coming back to Chhapaak, the film also stars Vikrant Massey in a pivotal role.