Chandigarh Kare Aashiqui Review: Despite all the woke noises that it seeks to make, it eventually does not budge an inch from its received wisdom about what constitutes masculinity. 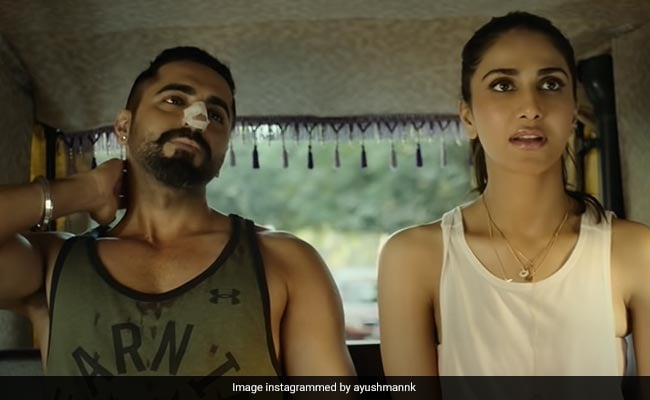 Ayushmann Khurrana is now a certified past master at playing imperfect, self-doubting men trying to surmount with physiological and psychological hurdles, of his own making and otherwise. In Chandigarh Kare Aashiqui, he tilts at one more such character who must contend with a disorienting personal crisis and find a way out of a corner.

Directed by Abhishek Kapoor, Chandigarh Kare Aashiqui extends Ayushmann Khurrana's experiments with subjects that are usually swept under the carpet in this country. But this film is more in the Badhai Ho zone, where Khurrana is in a reactive mode, than in the Shubh Mangal Savdhaan zone, where his onscreen character navigates a personal dysfunction and the challenges it poses.

Chandigarh Kare Aashiqui sees him in the guise of a ponytailed, 30-year-old gym owner and bodybuilder, a government school-educated, sanitary ware businessman's son who aspires in vain to be the city's strongest man to live down the bullying that he faced after losing his mother at the age of 13.

The gym isn't in the pink of health until a svelte Zumba instructor walks through its portals and pulls off a dramatic turnaround. That, however, isn't the only reason why the pretty woman soon has the hero eating out of her hands.

Lust kicks in well before love does and the sluice-gates of passion are well and truly thrown open. And then, reality strikes. The man learns that the woman isn't what he thinks she is. She has been through something that he can barely comprehend, let alone properly process. Shock, anger and confusion assail the guy.

On a strictly superficial level, Chandigarh Kare Aashiqui is bright, breezy, boisterous and easy to sail through. Sadly, it lets contradictory signals and problematic messaging undermine its positive intent. The film would us believe that it is batting for inclusivity and diversity but it cannot help ending without celebratory posturing over the crowning of "Chandigarh ka sabse bhaari bharkam mard".

Despite all the woke noises that it seeks to make, it eventually does not budge an inch from its received wisdom about what constitutes masculinity. To be fair, the film does try to blend dashes of humour with straitlaced earnestness (in the manner that Shubh Mangal Savdhaan, Dream Girl, Bala and Shubh Mangal Zyada Savdhaan did with varying degrees of success) to tackle a prickly theme that is always in danger of turning from the merely tricky to the unconscionably ticklish. It calls for a high level of sensitivity. And therein lies the rub.

Director Kapoor, working with a script written by Supratik Sen and Tushar Paranjpe on the basis of a story idea credited to Simran Sahni, sees the funnier side of things even as he probes the awkward nature of society's approach to people who defy conservative notions of normality.

Chandigarh Kare Aashiqui presents the amorous liaison between Manvinder "Manu" Munjal (Khurrana) and Maanvi Brar (Vaani Kapoor), a retired Brigadier's daughter who springs a surprise on the former when he is wholly and helplessly into her, through the prism of the principal characters' relatives and friends as much as it does from the standpoints of the two individuals themselves.

Manu is foxed out of his wits and so are his father (Girish Dhamija), a widower waiting for an opportunity to wed his Muslim beloved, and his cantankerous sisters who, unsurprisingly, are dying to see him hitched to gori chitti girl.

Maanvi has a supportive father (Kanwaljit Singh), who defends her right to make her own choices in life. But as her experience with Manu and his friends and family demonstrate, society has a long way to go when it comes to the matter of being sensitive to those who are not like the rest of us.

Chandigarh Kare Aashiqui might serve the purpose of starting a conversation because it uses mainstream Mumbai movie methods to present the unconventional love story with all the seriousness that it merits. But make no mistake, the film will also raise questions about the wisdom of using the safe device of a comic love story to turn the spotlight on a reality that does not get enough attention from Bollywood scriptwriters.

But, assessing the effort, solely on the strength of its entertainment quotient, one cannot but commend Chandigarh Kare Aashiqui. It is a diverting movie that walks the fine line between its avowed recreational goals and its larger intent - engaging the audience in a deadly serious discourse about a young man thrown off completely by the discovery of truth about his girlfriend that he would have had no way anticipating - without losing its balance.

The writing is generally on point until the point where the last quarter of the begins and the film when it slips into triteness. The film eschews overt drama and preachy passages as it delves into a relationship in which passion is on the verge of a precipitous dip when confronted with hard facts.

The man, when faced with a choice he did not bargain for, is both bewildered and blindsided. People around him, barring honourable exceptions, do not help matters. They let their misconceptions and prejudices get in the way. But when they seem to be pulling away from their prejudices, the film throws in the towel and flies off at a tangent.

Ayushmann Khurrana, having undergone a significant physical makeover to slip into the skin of a bodybuilder, appears to be having a great time giving shape to the character. He is a Chandigarh lad in real life, so he isn't doing any impersonation or mimicking here. He is himself, a fact that adds depth and range to the portrayal.

Vaani Kapoor is a revelation. Playing a challenging role that requires her to be much more than a hot bod and a pretty face, she is equal to the task. Any doubts that one might entertain about her suitability for the role would rest entirely on external considerations. Judged purely in the context of the film and what she brings to the table, she justifies the casting.

Chandigarh Kare Aashiqui embraces the right line of thinking - full marks to the writers and the director on that score - and runs with it for a while and then lets it slip out of its grasp. By the time it gets to the finishing line, it is back to square one.

Chandigarh Kare Aashiqui could have been a well-targeted blow to regressive shibboleths. All it manages to muster is a feeble jab. A massive missed opportunity.

West Side Story Review: Steven Spielberg's Musical Sways To Its Own Beat