She looks stunning in both though 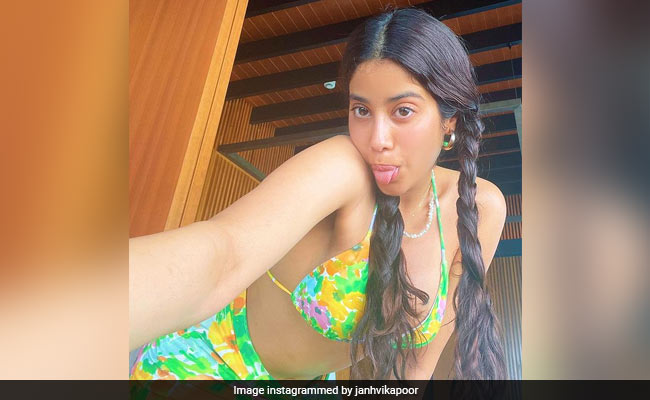 Janhvi Kapoor is making Maldives look so good, no second thoughts about that. The actress, who checked into the island nation earlier this week, has been sharing pictures of her OOTD and we are having a tough time picking what we like more - the recently posted bikini pictures or the shots from the swimsuit she wore earlier. On Friday, Janhvi shared pictures, in which she can be seen dressed in a printed bikini with shades of yellow and green. "Island girl," she captioned the post. On Thursday evening, the actress shared stunning pictures from her holiday, dressed in a swimsuit. She can be seen smiling at the camera in one of the pictures and she captioned the post: "Iridescence." ICYMI, check out the pictures here:

When Janhvi Kapoor checked into Maldives earlier this week, she shared these pictures and she wrote: "Last to get on the Maldives bandwagon but I fully get the hype."

"We were trying to spell LAME in case you guys didn't get it," Janhvi wrote sharing this picture.

Last year, Janhvi Kapoor was seen in Gunjan Saxena: The Kargil Girl, which released on streaming platform Netflix. This year, she starred in the horror comedy Roohi, opposite Rajkummar Rao and Varun Sharma. Janhvi Kapoor stepped into Bollywood with the 2018 film Dhadak, opposite Ishaan Khatter. She was also a part of Netflix's Ghost Stories. The actress' line-up of film includes comedy Dostana 2, co-starring Kartik Aaryan. She will also be seen in Good Luck Jerry.

For Sara Ali Khan, A Lot Has Changed Since This Extreme Throwback. But One Thing Hasn't...