Janhvi Kapoor, filmy in her own ways, also included a palat moment in the album 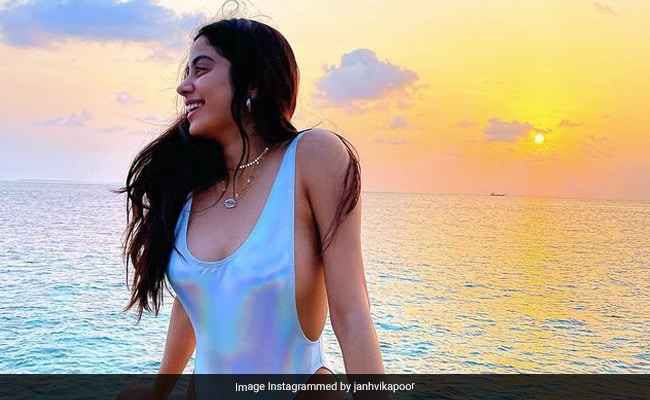 Janhvi Kapoor checked in from the Maldives (courtesy janhvikapoor)

Janhvi Kapoor knows just how to wow her Instafam and her new photos from the Maldives is proof of just that. The Roohi actress checked into the Maldives recently - she's a new addition to the list of celebrities who have the Maldives stamp on their passports already. On Thursday evening, Janhvi shared glimpses of her vacation itinerary, which of course includes swimming in the clear blue Maldivian sea. What particularly caught out eye is Janhvi's metallic swimsuit, which matched the colour of the sunset sky. "Iridescence," is how Janhvi captioned the photos along with the rainbow icon.

Janhvi Kapoor, filmy in her own way, also included a palat moment in the album:

Ahead of this, we were witness to the many moods of Janhvi Kapoor today morning. Checking in from the Westin Maldives, Janhvi wrote: "Last to get on the Maldives bandwagon but I fully get the hype." In the photos, Janhvi can be seen clicking mirror selfies, chilling on the wooden deck of her water villa and enjoying some local fruits. PS - Janhvi Kapoor's accessory game deserves an applause.

Janhvi Kapoor was recently in New York, were her sister Khushi Kapoor is studying film. In terms of work, Janhvi Kapoor was last seen in horror comedy Roohi, opposite Rajkummar Rao and Varun Sharma. Janhvi Kapoor stepped into Bollywood with the 2018 film Dhadak, opposite Ishaan Khatter. She was also a part of Netflix's Ghost Stories. The actress' line-up of film includes comedy Dostana 2, co-starring Kartik Aaryan. She will also be seen in Good Luck Jerry.