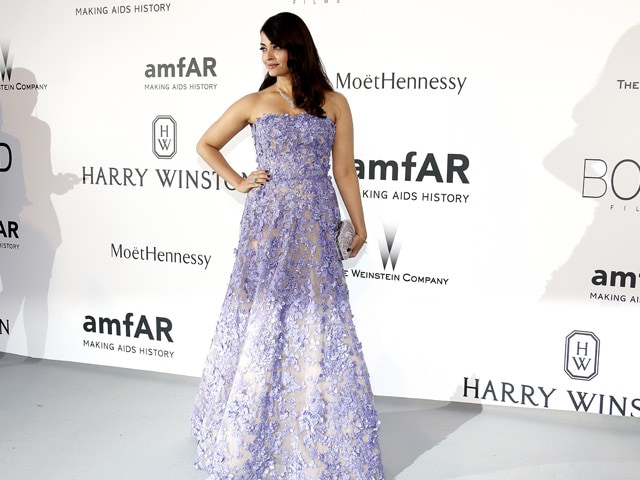 This is Aishwarya's 14th year at the Cannes Film Festival. Image credit: AFP

New Delhi: Bollywood actress Aishwarya Rai Bachchan led the celebrity roll call of A-List stars as she graced the red carpet at the annual amfAR Cinema Against AIDS gala held at the famous Hotel du Cap-Eden-Roc in Cannes on May 21.

Fetching in a mauve Elie Saab gown, Ash completed her look with diamond jewellery and her hair styled in soft waves.

Conspicuous by his absence was her husband, actor Abhishek Bachchan, who usually escorts her to the event each year. He had tweeted earlier

Unfortunately due to work commitments I can't attend the AMFAR gala today. But the better half is there to represent.

Promoted
Listen to the latest songs, only on JioSaavn.com
Aishwarya has been at Cannes for several days for her promotional duties as a L'Oreal Paris ambassador. This is her 14th year at Cannes.

The actress who is a big draw at the festival, picked a white Ralph & Russo dress for her previous red carpet look on Wednesday. Her first, on May 17, was in a teal gown, again by Elie Saab and turned the fashion police upon her. She redeemed herself somewhat with a claret Oscar de la Renta gown at the launch of her comeback film Jazbaa on May 19.