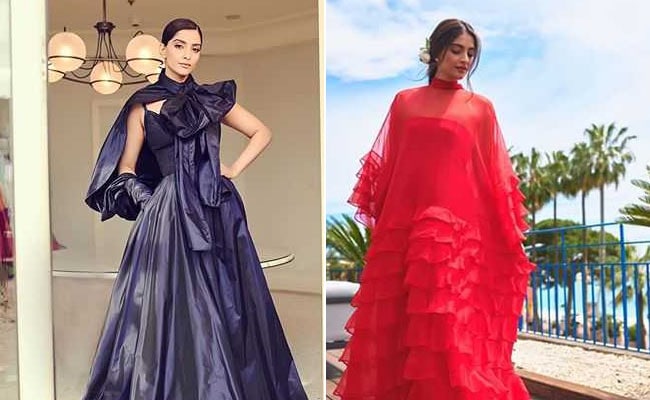 There's still time for Sonam Kapoor's appearance on the red carpet at the ongoing 72nd edition of the Cannes Film Festival but the actress quenched the curiosity of her fans by sharing pictures from some of her looks on Instagram. Sonam's outfits were a perfect amalgamation of billowing silhouettes and a pallet full of bright colours. One of the looks that Sonam sported during the day, was a purple gown, designed by Elie Saab. The extravagant bow and the cape were undoubtedly the highlights of her dress. Sonam styled her hair in a pony tail and she accessorised her look with diamond studs by Chopard jewelry. Sonam's sister Rhea Kapoor shared a picture of the actress on her Instagram profile and she wrote: "Let's do some glamorous press this is Cannes for God's sake, she said pulling out her Elie Saab."

@eliesaabworld for press all day everyday..

During her day out at the French Riviera, Sonam Kapoor opted for a red layered multiple Valentino gown, with extended ruffled sleeves. She channeled her inner fashion Goddess with a flaming red dress and delicate jewelry. The actress gave her hair a tousled look and accessorised her hair with white flowers Sonam wore a pair of matching red stilettoes. She shared a picture of her day look on her Instagram profile.

After reaching the French Riviera, an excited Sonam shared a video on her Instagram profile, in which she greeted her fans in a typical French fashion. Sonam was dressed in a striped blazer and she paired it with blue trousers. She wore a pair of square-rimmed sunglasses and grey pumps."Bonjour de Cannes," said Sonam Kapoor.

This is Sonam Kapoor's 10th year in the French Riviera as an ambassador for the cosmetics brand L'Oreal. Sonam has been accompanied by her filmmaker sister Rhea Kapoor, who spilled the beans on Sonam's outfits for this year's Cannes Film Festival and told news agency IANS that the actress' outfits will be all about simplicity and elegance. "I think this year we are going to focus on simplicity and elegance," said Rhea Kapoor.